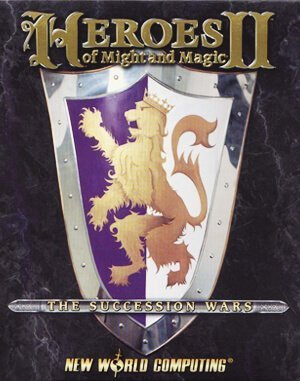 Click here to play Heroes of Might and Magic 2 online
4.6 /5
The canonical ending of Heroes I results in Lord Morglin Ironfist's victory. In the following years, he has successfully unified the continent of Enroth and secured his rule as king. Upon the king's death, his two sons, Archibald and Roland, vie for the crown.

When the game first loads, you get a blank black screen, you need to press the ESC key then the main menu will appear. Or you can double click to the game screen.

Heroes of Might and Magic II is a fantasy turn-based strategy game which takes place in the land of Enroth, a place of magic. There are a multitude of creature types, from griffins to rocs, golems to pikemen, unicorns to hydras, and four different dragons. Each castle type has six different creatures, from the weak to the strong. There are six castle types, each corresponding to a hero class: Knight, Sorceress, Wizard (Good side), Barbarian, Necromancer and Warlock (Evil side). There are also six different types of neutral creatures you can recruit in special structures scattered about the maps.

Heroes II uses a magic point system that allows the player to apportion spell use as needed, while the varying point cost of different spells maintains balance. Another major feature introduced in Heroes II is the ability to upgrade units, granting them improved statistics and, in some cases, important abilities. For example, upgrading Vampires to Vampire Lords enables them to absorb health and even to resurrect units.

Compared to the first game, this sequel has larger and more interactive combat screens. The spell system is now based on spell points instead of spell memorization.

You can play Heroes of Might and Magic 2 online, in web browser for free!