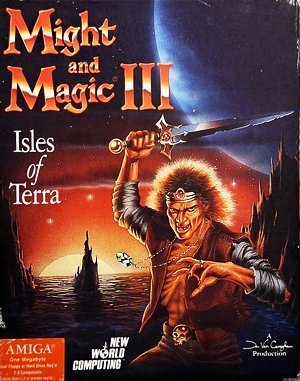 Might and Magic III: Isles of Terra game description

A party of brave heroes managed to defeat the corrupted guardian Sheltem as he attempted to destroy the world of CRON. However, the great battle between the guardians Corak and Sheltem continued in another place – the world of Terra, where Sheltem was originally appointed as a guardian. Revolting against the powerful race of the Ancients, Sheltem takes possession of their space-traveling nacelles, hurling them at the suns of other planets. It is now up to a group of local adventurers to help Corak and vanquish Sheltem once and for all.

Isles of Terra is the third installment in the Might and Magic series, and a sequel to Gates to Another World. Like its predecessors, it is a role-playing game focusing on first-person exploration of vast pseudo-3D environments, character building, and turn-based combat. The five selectable races remain the same as in the previous games, as well as the eight character classes with the addition of two new ones: Druid and Ranger. Like in the second game, characters may learn unique skills such as thievery, swimming, merchant, and others.

This installment does away with random or pre-set enemy encounters, featuring instead enemies dynamically roaming the game world, allowing to initiate combat from a distance (for example with ranged attacks or spells). There is no option to bribe or surrender to enemies, and escaping combat can be accomplished simply by moving away, unless the enemies have already locked on the party. An automap feature is available at all times, and the player is also allowed to save the game at any time.

Play Might and Magic III: Isles of Terra online

You can play Might and Magic III: Isles of Terra online here, in web browser for free!

Leisure Suit Larry 1: In the Land of the Lounge Lizards VGA

Empire II: The Art of War