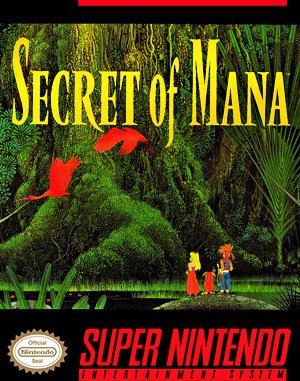 Click here to play Secret of Mana online
3.7 /5
An action RPG for the Super Nintendo and the second game in the Seiken Densetsu series. Secret of Mana can be played by up to three players simultaneously, and is widely regarded as one of the system's finest games.

Secret of Mana is an action RPG, featuring real-time hack-and-slash style combat, in which up to two computer-controlled companions can accompany you. Play Secret of Mana online!

The protagonist has a stamina gauge: the more stamina he has, the more powerful his strike is. The player also has access to a growing arsenal of spells with various effects. It is possible to upgrade weapons, armor, and magic to higher levels.

Long ago, people lived in harmony with the natural world and used the power of Mana to help their nations grow. But when evil forces took control of the Mana Fortress, seeking to use it to conquer the world, a terrible war began which destroyed much of civilization but brought peace to the world once more. Over the long years, the events of the past became but legends to the new generations of humans. But history repeats itself…

One day while exploring a forbidden valley near his village, a young boy finds a rusty sword stuck in a stone. He does not realize that this is the Mana sword of legend, used in the great war of the past. By drawing the sword, the boy unwittingly summons hordes of monsters, and is expelled from his village for breaking the ancient taboo. A mysterious knight Jema who is passing through the area recognizes the sword and gives him instructions for the future. First, he must repair the sword, and then, with its help, take control of the Mana seeds which can be found hidden around the world to prevent them from falling into evil hands.