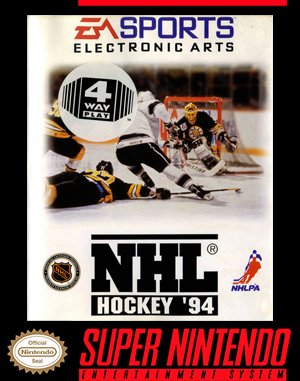 Click here to play NHL ’94 online
4.4 /5
The 1994 entry in EA's ice hockey series. It is widely considered the best of the NHL series and one of the best hockey games ever made.

After establishing themselves in the virtual rinks, EA combined both NHL and NHLPA licenses in NHL ’94, allowing them to feature all 26 real teams (including both expansion teams) and players of the new NHL season for the first time in the series. Play NHL ’94 online!

Aside from the licenses, the gameplay for this edition sees for the first time the inclusion of the devastating one-timer shot, but to keep forwards (literally) in check, defenders also feature harder body checks, with new animations. For an additional challenge, players can also choose to control the goalkeeper manually. A popular feature in previous editions, fighting is completely removed from the game. Game modes include exhibition games (or “regular season” in-game), playoffs (best of one or best of seven) and an all new shoot-out mode. The main options remain basically the same couple since the establishment of the series – period length (5, 10 or 20 minutes), line changes (off, manual or the new automatic mode) and penalties (off, on, on but no offsides).

While there are some minor differences between platforms (Genesis features record keeping for users and the MegaCD version has more stat screens, CD quality audio backdrops and the usual highlight clips here and there), only the PC version released at the same time features complete season action.