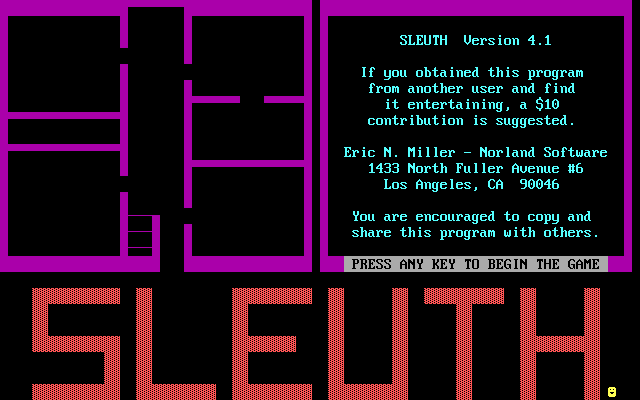 Sleuth was launched by Norland Software in the year 1983 which was loved by all old and young. It’s an interesting DOS game and can be played online by clicking here.

The genre of the text quests has a very long history. Its founder is considered to be the game Colossal Cave Adventure, released in 1975. That is, until the output Sleuth genre has existed for eight years, and some experience has already been accumulated. After the appearance of home computers based on MS-DOS this platform are not left out interactive fiction'AMI games were many venerable companies such as, for example, Infocom, Level 9, Magnetic Scrolls and Interplay,earned them decent money. But to be honest, to develop the genre ceased. In the entire history of commercial existence, ending roughly in the early 1990s, the most notable difference text quests from the progenitor was an illustration to what is happening, which were not used in all projects, that is, was made absolutely entire rendering process to the universal peripheral device imagination of the player. But there were renegades, and Sleuth is one of them.

The key difference from most other representatives of the genre is, no matter how strange it may seem, a relatively small amount of text. This was achieved by completely eliminating the need to navigate in the space by entering the corresponding commands and the significant reduction of symbols in the description of the environment, as the revenue was intended schedule. Yes, most of the screen here is not of the letter, and a schematic map of a two story house to move which can be through keyboard arrows.

Our hero, marked face, is a detective who has to investigate a brutal murder. Everyone in the house seven people are suspects, one of them is the culprit. In order to bring it to clean water, necessary to accurately identify the crime scene, find the weapon and, in fact, the attacker. If you complete the first two tasks, you must thoroughly search the house, to solve the third, you will need to interview all those present and, after analyzing their evidence, find the culprit. The exposure takes place in the spirit of the classic detective novels: the detective gathers everyone in one room and pre-painted in detail all the arguments, calls the name of the killer.

This would be not so simple, though challenging game also can not be called. Detective faces several troubles that he can deliver counterparts: for example, if to be quick enough (and the number of moves performed is not displayed), the killer can kill the player if he got too close; failure is waiting and in that case, if the indictment fail to present a reliable picture of the crime.

Compared to other text-based quests Sleuth has a very small length is hardly the first attempt will take over an hour (and replay value present here: criminals are always in different rooms, as well as different place, and murder weapon), but certainly time it would have taken more if here Automap. In addition, the vocabulary of the parser frankly stingy. But this does not negate the great historical interest of the game as an attempt in 1983 to freshen up the look at even then not a new genre.

Not sure how to pass your time, why not play our classic videogame Sleuth online? And the best part, it is for free!

Ultima IV: Quest of the Avatar