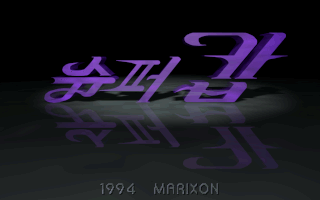 A Side view perspective game called Super Cop was released by Marixon in the year 1994. Play it online now.

Super Cop - the demo version of the namesake Korean platformer. At the moment the full version is not found. Perhaps soon it will appear on the website, and description will increase in size (according to one source, each level contains a new element of gameplay).

The plot, as almost the entire interface is in Korean language, but the point seems to be clear - the police (judging by the name of the game and the patch "POLICE" on the clothes) to save the girl (a Princess?). Plain but acceptable for the genre.

As noted on one Western site, Super Cop is very similar in gameplay and graphical elements on platformer from Apogee. Indeed, the similarities to the two-dimensional Dukes is the interaction of weapons with bonuses, shooting on the boxes, picking up disks, cameras, sprites etc (which is a who knows what) filled with dragons, rabbits on the balloons, throw the TNT, and the aforementioned cameras. Boss - giant robot octopus legs (!), which need to get gathered 15 floppies-keys. In addition to these, there are very rare kits and improvements for carrying around weapons.

Externally (VGA 320x200) part of the adventures of a brave COP looks good. The cartoonish style and to some extent even ludicrous. The music is extremely annoying, that is a strong reason to mute. But digitized effects... So that's that, and rejected of men cry with the image of the baby-short stack does not fit well.

Not to mention the complexity. Sometimes because of the number of rounds gives the number of frames per second. Those kits improve the scale of health only one space, which is extremely unfair. Battle with octopus can pull an unprepared player a lot of nerves. On top of all that after death the player starts from the start of the level again without disks. In General, this platformer is not easy.

Recommend Super Cop it is possible the fans of this genre on the IBM PC and interested in a Korean game development. But, unfortunately, this is just a demo version.

Enjoy playing Super Cop online, it can be played on your browser and is free.