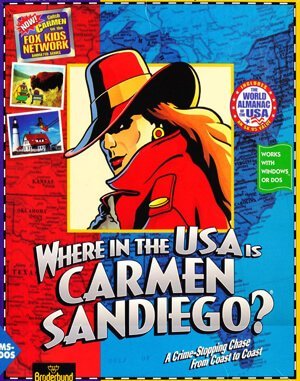 Where in the USA is Carmen Sandiego Deluxe

Click here to play Where in the USA is Carmen Sandiego Deluxe online
3.9 /5
Unlike in the previous games, the image of the locations took up most the screen, with the game options only taking up the bottom third of the screen. Each location had an elaborately painted backdrop that could be scrolled around a full three hundred and sixty degrees. Each location provided clues in the form of several bystanders and scraps of paper lying on the ground. The scraps of paper exclusively provided clues about the suspect's appearance. An energy meter at the bottom of the screen steadily diminishes as the player travels between states, speaks with bystanders, and obtains a warrant. If the meter is completely emptied, the case ends in failure.

Where in the USA is Carmen Sandiego Deluxe game description

Sign your name up, then listen to the chief give you details about the suspect and the loot stolen by them, the location where the suspect was last seen, and the deadline by which you have to apprehend the suspect by. Question witnesses and contact informants to get information on the next location that the suspect headed to, as well as any information that could lead to a warrant. (You cannot arrest the suspect without one.) Determining where to go next will require research on your part, as everyone you question will reveal places, not cities that appear on the travel map.

When you have decided where you should go next, you can travel to the next location. And from there, the above process gets repeated until you finally caught up with the suspect. A new feature on this map allows you to zoom in to a state, allowing you to look closer on its towns and terrain, and its surrounding states.

Play Where in the USA is Carmen Sandiego Deluxe online

You can play Where in the USA is Carmen Sandiego Deluxe online here, in web browser for free!

Putt-Putt Goes to the Moon

Orbits: Voyage Through the Solar System