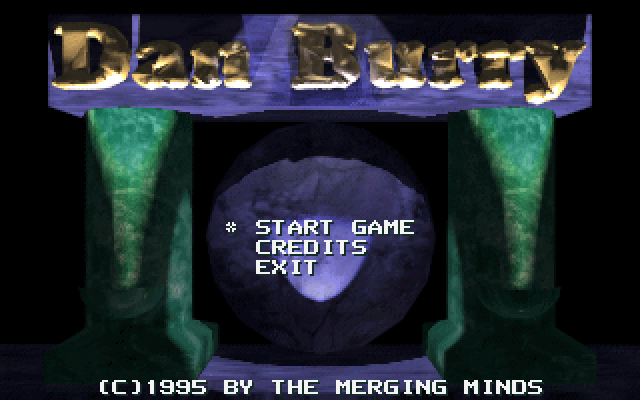 Dan Burry, a top-notch Arcade game was developed by Boeder Software in the year 1995. This was a very famous and in-demand DOS game. You can play it online here again.

Dan Burry - on Old-Games.ru. One of the rarest games in history, seemingly by some phantom or a Mirage, thanks to the generosity of a good collector in the penultimate day of October, 2018 became available to everyone. For her there is no information in the relevant databases (including German, where she hails from) or articles, and screenshots from the video to detect. And here she is. And the last word can be pronounced with incredible pleasure, putting him in a special sense: not simply "there" and - now - all.

The action takes place on some planet, whose population is externally completely identical people called Burri. For many years prior to the start of gaming events in this world were terrible (perhaps thermonuclear) war, destroyed a large part of the population and made the surface of a celestial body uninhabitable. The few survivors took refuge underground, where they lived at the expense of a supercomputer, giving a makeshift colony of artificial light. Operation of the machine in turn provided eight controllers, without which it could operate only a very short time. One of the Bombs, one of Burri, stole the device, trying to seize control of the light source that would make him absolute dictator over the people. In his fit of madness, he reached what came out on the deadly surface, found a castle and an abandoned military base and hid at each of these four objects of the controller. However, the combat robots that functioned since the war, and all sorts of monsters and mutants to populate the planet after leaving Burri into the ground, almost killed him. Miraculously left alive, the Bombs came back and repented of the committed crime, - but the deed was already done. Then the girl named Dan, the most daring and courageous of Burri, he decided alone to go upstairs and look for the device in order to return to the settlement the hope for survival.

Despite such a pathetic backstory, before us is a fairly typical essentially a platformer with the only peculiarity that the heroine is represented in perspective side view, he can only jump and climb ladders, but is devoid of any ability to fight. Its mission, as follows from the previous paragraph, is to look for the controller (the tablet numbered cards) and automatically pick them up (the progress is visually displayed as the filling of the eight cells in the lower part of the screen). Level two - the aforementioned castle and a military base, and access to the second opens only after a thorough research first. A time limit, oddly enough, is missing; the protagonistki there are a few "lives" and - formal - expressed in a small percentage health within each of them, however, in most cases, clash with the enemies causes instant death, rebirth after which - if left attempt - takes place almost in the same place (in this case the system saves as such is absent).

Opponents of the castle presents all kinds of wildlife - both flying and crawling (crabs, snakes, bats, likes birds, and so forth), on a military base - different types of robots. All these creatures move back and forth at a predetermined (and often the entire width of the respective location) trajectories and usually (though not always) non-corrosive, however, when physical contact is killed or at least - if he was just too "light" - wounded heroine. Almost every screen will have to climb all the stairs up and down, simultaneously watching the movements of creatures: quite often, literally next to you someone flies down and creeps, so move through the steps needed depending on the situation, computing the regularities in the behavior of the enemies and pausing at the right moments. Water, which fills a chasm designed for jumping, deadly, and not only she, but her spray - in practice this means the need before making the jump to carefully calculate the starting point, and unlike the vast majority of platformers here it is not on the edge of a hard surface. Periodically there are also all sorts of traps - such as falling from the ceiling, balls of fire, - to overcome which, again, need to remember the intervals.

Graphics Dan Burry will surely appeal to any fan of the good old 2D games: here is a pretty accurate portrayal, relatively diverse, as this allows the surroundings, the backgrounds, pretty interesting monsters; in the case of the death of the heroine shows the original animation - it turns into a grave cross with a human face and then flies up somewhere. We would like to mention the cheerful music, perfectly suited to the unfolding on-screen action to complement and cool the local atmosphere. And since the difficulty level is clearly above average, recommend Dan Burry is quite possible and connoisseurs of logical platformer, and not only collectors of curiosities, although again, that this thing applies to higher rarities.

Enjoy playing Dan Burry online, it can be played on your browser and is free.