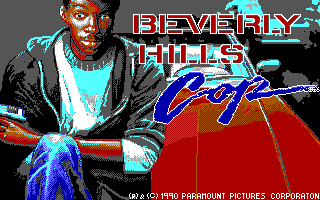 Remember playing your all-time favorite Beverly Hills Cop which was launched by Tynesoft Computer Software in the year 1990? You can now play it online again here.

The game is on the Comedy blockbuster "Beverly hills" with Eddie Murphy in the title role. Of course, the arcade, though multifaceted.

There are four levels, each of which is a mini-game at a specific scene from the film. First on the fight (mostly hands) with the bad guys in the warehouse, then drive the vehicle with the first person (this level I liked the most – like the best racing on old slot machines) and shoot at enemies, then with a "high" third person running around the Park of the mansion, again killing enemies (there already being two pistols, each with limited ammo), and finally, the last episode, the battle in the first person from the villain, which have yet to be found. From this level, you will be notified immediately of special interest and the beauty of the graphics do not wait. This level looks suspiciously like the game Akalabeth...

In General to graphics, and the gameplay, no major complaints. Not a masterpiece, of course, but quite a good and varied arcade, besides following very closely the plot of the original, should appeal to fans of film and fans of the genre.

The Need for Speed