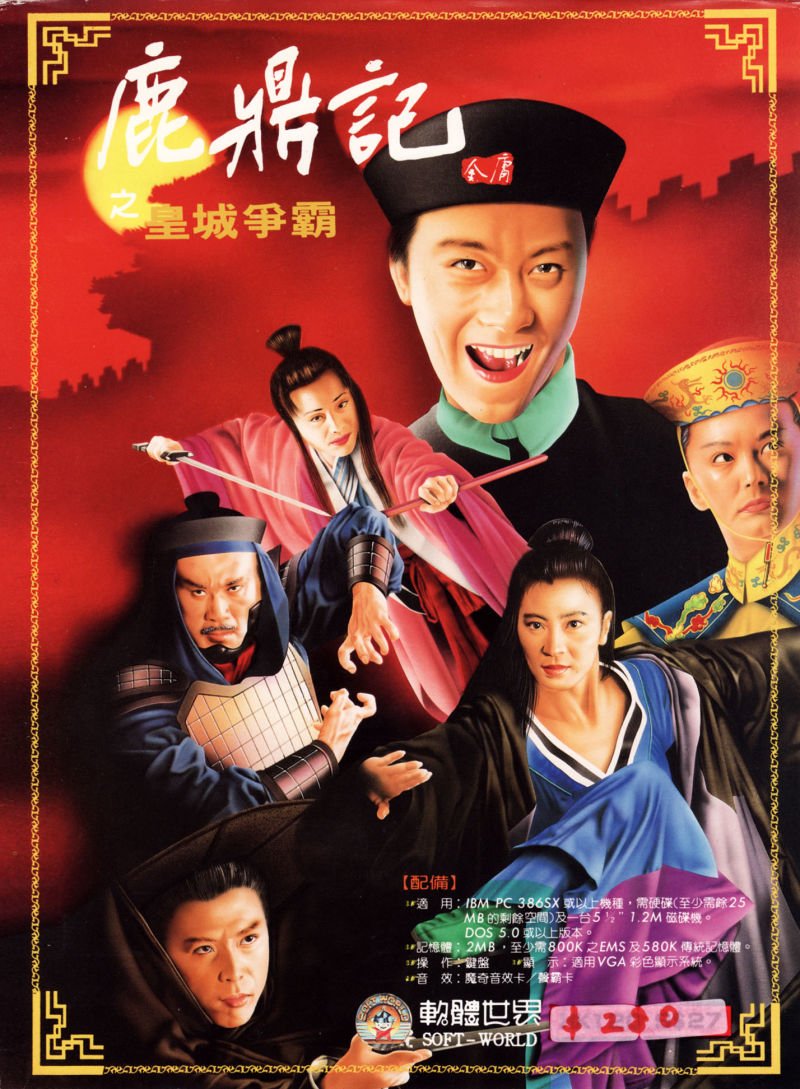 Lu Ding Ji, a top-notch Role-Playing (RPG) game was developed by Soft-World in the year 1994. This was a very famous and in-demand DOS game. You can play it online here again.

Another role-playing game based on the works creatively very productive Hong Kong writer Jin Yoon (chin. – 金庸, eng. the name Louis Cha). This RPG in terms of quality of performance made a claim on some SNES-"pristupacnosti" charts, but was published only for DOS platform. The plot is very interesting and unusual in the light of all other literary creations Jin young.

It was one of the last novels of the writer. Apparently, brave, honest and noble heroes of the genre UNL fed up old man, and so he decided to "represent" exactly... the opposite. So, the protagonist of the novel – a young man named Wei Shaobao (韋小寶). Speaking directly and politically incorrect, he is the son of a prostitute from a brothel (麗春院), located in Yangzhou (揚州). In the hold the same specialized institution, our hero was born and raised. But this is not enough. Wei Taobao is a walking concentration of known human vices: laziness, greed and illiteracy. The time setting of the novel – the beginning of the Qing dynasty ( 清). In the N-dtsat years shiftless teenager of Taobao came from the mother of the nest to see the world (this is the beginning of the game). Through a series of adventures he reached the capital of Beijing. By chance he was in the Forbidden City, where he had led everyone by the nose, portraying a eunuch. And there was his fateful meeting with the young Emperor Kang XI (康熙). It is he whom we now owe the final adoption of the classical scheme of classification of characters according to 214 graphic keys. So Wei Taobao began his brilliant career at court. But the liveliness of nature throwing it from one intrigue to another. He was friends with both loyal to the Emperor and representatives of anti-government forces. I must add that due to a small weakness of his nature Sawbo managed to marry seven different women. But despite a whole bunch of his "positive" qualities of the Emperor he never failed, many times assisted him and was very loyal. He even for special merits awarded the highest title in the court and a new noble name is Lou Dean (鹿鼎). But multiple old contacts with various dubious companies have played a fatal role. In the end, fate has put Wei Shaobao a difficult choice: either absolute loyalty to the Emperor, or the preservation of relationships with friends, many of whom were not loyal to Kang XI. Unable to bear this acute dilemma, he decided to go away and lead a reclusive life. More about Wei Shaobao never heard of. The Emperor has repeatedly undertaken the search for his friend in the areas to the South of the Yangtze river, but to no avail...

In the gameplay you can easily control the movements of your character (Wei Taobao), to enter the buildings and speak with many residents of the city. Inside the center is always some kind of artistic composition or large characters on the relevant topic. From RPG-parameters of the character are: strength (內力), attack (攻擊力), defense (防禦力), dexterity (敏捷), discipline (層次), experience (經驗), weapons (武器)，status (狀態). Battle implemented step by step, which at that time was the norm. In battle mode you can select the following available actions: attack (攻擊), defense (防守), cunning (絕招), technical stunt (特技) and finally, the most important action is to run (逃走). Basically, game the menu items (物品) and control group (陣法). That is, you can drive for a few characters. In General, interactivity is good. You can go into the institutions (banks, gambling houses, etc.) and there to interact with NPCs or objects on relevant subjects. For example, in a gambling house (賭坊) can easily lose money.

Start the game you have with a stroll through the streets. Go to the gambling house and play there for the last 5 Liang. There you will be able to get the dice as a moral compensation. Go back to the brothel. There had descended a fugitive Mao Shiba (茅十八), who searched the city all the guards (even portraits posted). Fight him and his companions. After defeating him you are, oddly enough, become friends. And then tell your sober grandmother Wei Chunhua (韋春花) that go forever.

The graph contrasts sharply with the highly artistic Chinese old style image of the atmosphere of the novels of Jin yuna in computer games. But on the tracks this graphics SNES-style gameplay and atmosphere didn't hurt. Characters are typically comical side short. This only further delays the player. There is a square on the map (normal an oblique projection) also foreground objects as sprites, walls, signs, etc. It adds a sense of three-dimensionality. The music is typical Chinese, nice and changing from situation to situation.

The game is made in traditional Chinese, with lots of dialogue, and even based on literary works known in Asia writer. But play it as a normal user, of course, possible, intuitively finding solutions in various situations. Therefore, on our website another game creation on the novel Jin yuna is always available for lovers of old Chinese games.

Have you ever wondered what kind of video games were played in the good old days? Try playing Lu Ding Ji online now and we are sure you will not stop playing again.