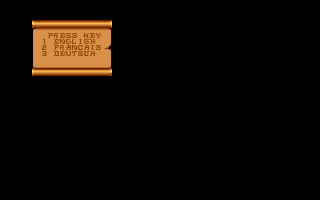 A very interesting DOS game was released by The Bitmap Brothers in the year 1991. The game was called Cadaver. You can now play it online.

Brutal action-adventure game from our old friends, the Bitmap Brothers.

A professional thief Caradoc decided to Rob the biggest treasure in the Kingdom - a treasure abandoned castle of king wolf. And the most brazenly enters the dungeons of the castle through the sewers. On the boat. And then realizes that the castle is empty for a reason and that the rumors, which stretch about the terrible events taking place inside it - not really rumors...

The game has a clear structure - it is divided into a plurality of rooms-screens, each of which we are free to move in all three dimensions - Caradoc is able to jump and move objects to compile the makeshift stairs. Interaction with reality quest-contextual - menu when you approach an interactive object displays a list of possible actions applicable to it. Coins are poured into the pockets, fold the note into a tube, the weapon is in motion.

The castle creeps a lot of all sorts of trash that eat cardacino, and we have all to dissuade them of this. Immediately obvious is the main problem of isometric action to a-of Windows of the period - without a mouse accurate aiming is absolutely impossible task, especially for long-range weapons. Damn.

The other big issue is "interactivity". Since the interaction with the subject is possible only through uticaria his nose in it and picking a menu, the process is slow, so the option "ran into the room, stole the monster from under the nose of the subject and was" virtually impossible. It's a shame.

On the other hand, the game is addictive, the puzzles. Levers, keys, barrels, from which you can make a ladder - all of this stuff here in bulk. Prisovokupleniem books and scrolls, which we will intensively read and received another prototype of the classics of the epistolary genre - System Shock.

Overall - the game is a great lover of samosatene because the PC version is far less pleasant to handle than the Amiga, which is quite a long list of awards and titles. But to see at least one eye is. Branded music and graphical style of the authors is attached.

Want to play Cadaver online now, play it on your browser here.