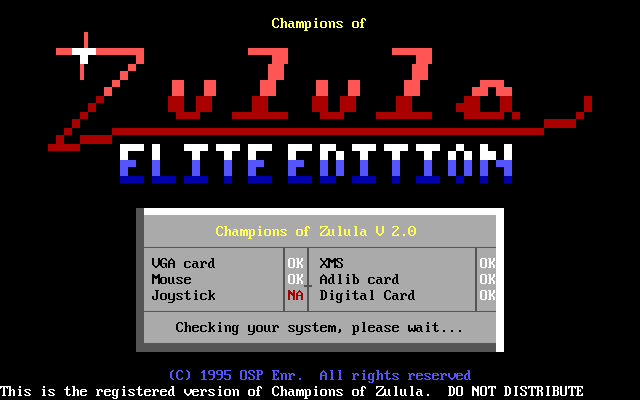 There are some video games which you will never forget. Champions of Zulula: Elite Edition is one of them. It was launched in 1995, by OSP Enr. but still loved by many. Play it online now.

Beautiful and extremely rare fighting game with RPG-element (!). The action takes place in a fantasy world populated by a huge number of races where there is a town called Akistar, famous for its tournaments in mortal combat. Formally, all these tournaments, tournaments of honor, the purpose of which each of the warriors to prove he is worth something (although deaths are very frequent contractions). But recently there were rumors that the city showed up the evil that is going some way to use the tournament to their advantage. So the player as a participant of the tournament should not just fight and win, but also try to uncover a conspiracy.

The basis of the gameplay – after all, of course, fighting, but fighting fantasy, but because very beautiful and exciting both externally and internally. All the characters can move in four directions, jump, put the block and apply several types of attacks (including unique); sometimes it happens that the fights do not occur one on one and two on two. The choice, by the way, there are several game modes, among which there are the championship, and a single bout (i.e., without role-playing part). There will be surprising in its originality bosses, for which it is impossible to play, and mandatory (another role-playing element!) and striking at the "deep" dialogues-hassle participants before the fights...

And all this, I must say, is made of excellent hand drawn graphics, all the characters are drawn large and even relatively clear, there are some effects (blood, shadows, and so on). Most likely, the game was originally released as shareware, which, alas, prevented this little masterpiece to gain the recognition he truly deserves. But now the game gets a second chance, and all those who love a truly unusual, fascinating and beautiful old fighting game, to draw their attention to it is necessary.

Want to play Champions of Zulula: Elite Edition online now, play it on your browser here.