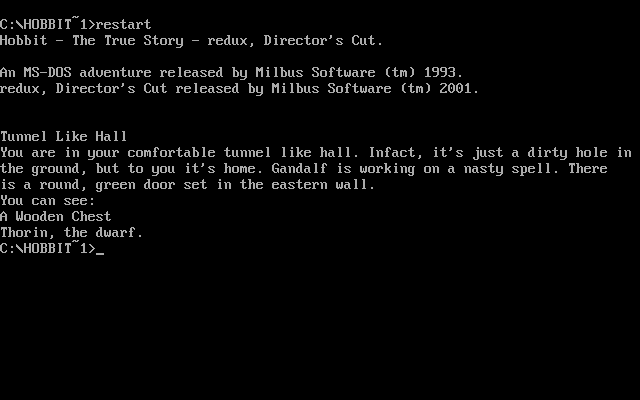 In 1993, a DOS game was released by Beam Software. The game was called The Hobbit and belongs to Adventure genre. Play it online by clicking here.

A text adventure with graphics - not the first but one of the first. And in addition - a game which the reviews were divided into diametrically opposed about equally: a masterpiece in the eyes of some and something impenetrable and crosses (and by the time this thing is already established) the canons of interactive fiction - for others.

As you can easily guess from the title, the game is made according to the book "the Hobbit, or There and Back again" (1937) famous British writer JRR Tolkien, Creator of the world of middle earth and the trilogy "the Lord of the rings", whose army of fans calls not only as a Professor. I must say that the story is largely - though not entirely - follows the original, but, firstly, for objective technical (and probably mental) constraints significantly reduces the number of satellites of the future Cracker (nickname the main character of "the Hobbit", Bilbo Baggins, gave the wizard Gandalf, who organized his participation in the journey with 12 dwarves - that they are implied under the satellites to the Lonely mountain), and secondly, allows look at many of the took place in the book the situation from a slightly different angle - so, as there was but as it could be.

In fact, at first glance - if you've ever played IF - it seems quite typical. Text on a black screen describing locations and situations, displayed only at the request of the player graphics and control via the keyboard input various commands to the Commission consistent with the described situation of action. The quality of the pictures, and frankly, unimportant, and the dominance of red color in CGA-palette this particular game on favor does not go, but you can make allowances for the age and Hobbit' (games, not Bilbo) or completely remove the visual component, especially because of the role she almost never plays. Descriptions of locations and development of the plot, I must say, is also not that encouraging - they are either relatively, or even very short (on some screens - just a couple of sentences) and not particularly detailed. But after a few minutes after the start of the game comes the understanding that there is something wrong - that is she really much different from the usual quest text.

First, the syntax: commands are often complex and non-trivial, they are not always be reduced to a simple ligament of verbs and nouns, and may represent a whole sentence. Secondly, the connection with the book - if you suddenly for some reason have not read her play just does not follow, as in a number of situations actually need to know how and what to do in order not to make mistakes. Then - even more interesting: the plot develops in real time. And completely. This means not only that you can somewhere in time, but also that often you need the banal quickness (!) text entry - otherwise, for example, a character with whom you're talking (and NPC enough and they are not limited to accompanying you Gandalf and Thorin Oakenshield) will not wait long to continue the development of the conversation. But this is not the most amazing thing: the behavior of many characters every time you start the game set at random - certainly not all, and only a few options, but it is almost the only case in history of a (sub)genre, when the level of difficulty, and even success as such depends not on skill or player choice, and from his Majesty's case, that means at least a partial replay value.

There are, however, really quite strange - first of all, the strange system of moving around that part of middle-earth, where the unfolding journey of Mr. Baggins: the game is actually possible that specifying different paths in any case you will be in the same location, because it is "bordered" with the left on several sides, so to speak. If we add to this really high difficulty of the puzzles (especially for those who are not familiar with the original work) and a lot of dangers, can easily lead to death - it becomes clear why the game authors have prepared for her is so extensive documentation and strongly recommend its use. Almost a key element of the latter is the map to reach the Smog is unlikely to succeed even hardcore Tolkienists.

The result for the umpteenth time to draw difficult: definitely unique, in many respects complex, sometimes like a chaotic, but still logical, even if it lives by its own laws IF. The atmosphere of the world of Tolkien, however, is not felt here very clearly, but as an independent work, this quest is very interesting, non-trivial and are able to challenge the loving interactive literature players, including - due to the replay value - even in case of successful passing.

Not sure how to pass your time, why not play our classic videogame The Hobbit online? And the best part, it is for free!