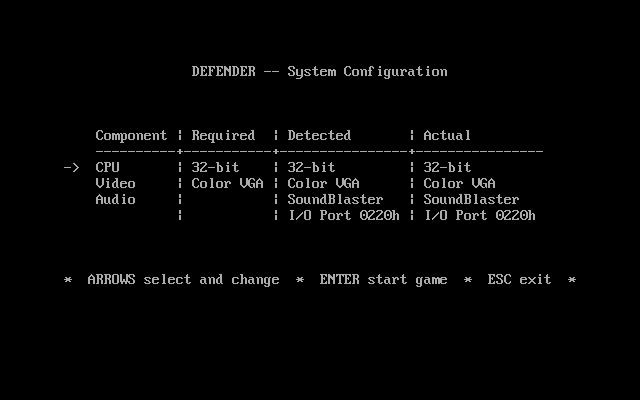 Defender is a Action game released by Softlair Computer Productions in 1992. It is an interesting DOS game and a must play for all old videogame lovers.

Ancient flying from the days of childhood computer games, which, however, continues to be insanely addictive with its gameplay, despite the 25-year anniversary.

Boat, boats of different aliens, a couple of weapons. Fly, shoot. Black screen, the green dot (that's our boat), pink twisting line (landscape), other people's boats and a couple of little yellow figures at the bottom (there is a kind of enemies, which can turn into mutants) – that, in General, and all that appear to our eyes.

The main difference of the game from the traditional "scrolling shooter" - the possibility of a relative freedom of movement in a world of limited screen: we can move in different directions (in 1983...)! The game also has radar, which can track the approaching threat. Finally, "in the heat of battle" you can shoot casually and those "men" who we are called to protect...

Indeed, "Holy simplicity": in spite of the aggressive and dynamic gameplay, the game has some soothing effect: after it becomes somehow extremely feels good, like coming back for a while in the days of large computers and small, but such relatives and joyful games.

Wonderful and sweet medicine from nostalgia for all oldhamers and, of course, platinum classic of the genre.