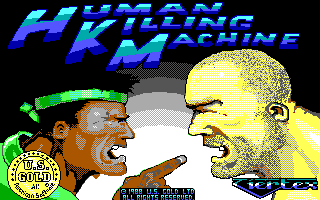 Is a real classic (though not quite unique) "IBM PC compatible platforms" comes at a personal computer! This is not some fan port, and do miraculously discovered the original DOS version of this game, the existence of which the vast majority of even the most experienced and knowledgeable oldgamer just had no idea!

Human Killing Machine is a fighting game on the "serial passage", but it is a fighting game, not a "beat-em-up". The protagonist of the game (and the only ones you can play) – never positive Asian fighter Kwon nickname, which is identical to the name of the game, decided to prove that he is the toughest, most skilled martial artists in the world. To this end, he travels to different major cities of the world and challenges the strongest fighters from different countries. Each of the fights will go literally to the death.

Gameplay is divided into levels, each level corresponds to a particular city, in which Kwon has arrived, and consists of several rounds against the two strongest fighters in the local (of course, first comes the "series" with one, then with another). Each round ends with "knockdown'om" - when the enemy falls to the ground. Thus to defeat different opponents need different amounts of these "knockdown's", for some others much hardier. Before each round, we always reported the number of times the Kwon need to beat the enemy to win and how many times the enemy – Kwon. Each of the soldiers a "life bar", shrinking from the received blows. The more "energy" remained the hero after the victory, the more bonus points on your account it gets. All Kwon has five "lives", if they lost then the game ends.

I must say that the gameplay is really interesting for a fighting game to not be named, because the number of devices is small and the battles as such – not quite spectacular (and it's putting it mildly – given how characters move). However, Human Killing Machine attracts quite a different variety of fighters and backgrounds. "Bloody Odyssey" Kwon will pass through various cities, including Barcelona, Amsterdam, Beirut and other. The first battle he even have to in the capital of our Motherland, Moscow, where the opponent will be a huge soldier in a fur cap named Igor who is physically much stronger Kwon. However, on the second level, in Amsterdam, will have to battle with equally strong and exotic opponent – local street criminal Maria; future opponents will be no less interesting – in fact two of them are not even people (but lower)!

Graphically, the game looks great only in terms of drawing backgrounds contractions, which often depict a specific place in the city where there is a fight (and if in the case of Moscow is Red Square, in the case of, for example, Amsterdam – some kind of night club in the slums). The characters, alas, traced much worse, though coarsely executed, and appear too blurry in comparison with versions from other platforms. However, the overall visuals of the game are very nice.

The verdict is that. First the game, of course, represents a truly enormous collection value. If you forget about it and to consider it as exactly the game genre "fighting" - that assessment is above average, but nothing more. Atmosphere – at the expense of truly different and interesting fighters and levels – here wonderful (and even a little bit like released much later game film "In search of adventure"), but that's overkill (although blood in the game not so much) and a weak combat system does not allow you to carry it even to just a good game. But a good fighting game Human Killing Machine can be called quite deservedly, so if you missed the "new" old fights "twist" - that to miss it in any case not worth it.