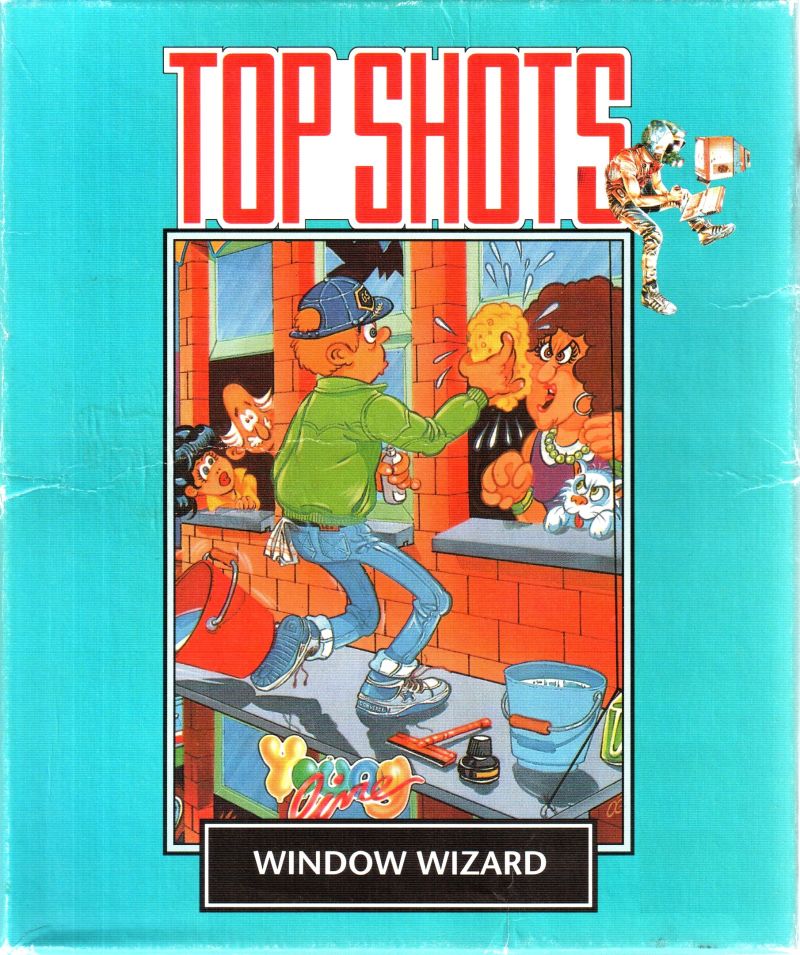 reLINE Software developed a Arcade game in the year 1991 called Window Wizard. You can play it online now.

Not quite normal and surprisingly rare arcade game, forgotten by all, including developers who denied the very existence of the version for the IBM PC. But here it is: almost another world premiere at Old-Games.ru. And this time the game is very interesting in itself, not only as a Museum exhibit, not intended to use for its intended purpose.

The Hanover company is known to reLINE several original works in the late 1980s and early 1990s years such as "Oil Imperium". However, given its product – test release was scheduled "children's" series of games YoungLine – was, in the humble opinion of the authors, "mega-failure", which is not even supposed to be born. Designed, apparently, back in 1989 under the name "Willy Window", the game was eventually published only two years later, with the help of the distributor, Softgold and under the more neutral banner of "Window Wizard" – apparently to avoid potentially dangerous associations with the then head of the popularly beloved company Microsoft.

However the hero of our name is still Willie, and it works as a window washer in apartment buildings. And therefore, our task – driving suspension cradle to move along the exterior walls of a residential high-rise buildings, in order to find and eliminate the Windows all kinds of dirt and at the same time try to avoid all sorts of dangers inherent in our difficult profession. On each floor there are two apartments, each apartment has two Windows and in each window – two section (a blind transom at the top and an opening part at the bottom: despite the German origin of the game, the action takes place in England or in the USA). Each such section should be treated specially, just pushing our platform; the movement is the arrow cursor, but for actually washing use the keys X and C are responsible for the movement of the hand with the rag left and right, respectively.

Of course, used in the process detergents that appear in the bottom right of the screen: button 1 is responsible for the selection of solution, which we will use 90% of the game time. In severe cases, when contamination of the window glass provided accidentally flying past the pigeon, you have to press 2 and choose a kind of abrasive with label IXO: be careful, since the application of the detergent on just the stained glass will cause it damage! In addition, stock IXO missing only once – if particularly dirty Windows and we have a few, press the number 3 and call for mini walkie talkies reinforcements soon, the assistant will throw us from the roof of another bottle of this tool, which will have to catch his cradle in the style of "Arkanoid". Actually, the top time and time will fall on a variety of subjects: some of them – computers, packing chips, suicides, etc. – deadly and in contact lead to the fall of our platform to the ground, thereby depriving Willie initially one of the available three lives; others – for example, dropped out of the Windows cats – it is even useful for their salvation translate into increased points, counter which, along with the number of remaining lives is displayed at the bottom center of the screen.

Of course, we are awarded points for each successfully cleaned object: the overall progress of clearing the current level is displayed in special line interface at the bottom left. Above shows a schematic representation of the nearest to our current location window that allows you to more accurately than in the main game screen, to determine the degree of spacenot each of the two sections. The fact that many inhabitants tend to sit at the open Windows of their apartments, thus preventing their washing: the authors claim a hundred different animated characters. And really, whom we'll meet in the process of our hard work! Vikings in horned helmets, pretty ladies, a thief Tyrolese with mugs of beer in hand, scientists with test tubes, etc., etc. – they all look really cute and funny in EGA mode (supported, but not recommended also CGA and Hercules), Recalling the initial orientation games for children.

In some of the open Windows exhibited valuables, the bags with dollars, trophies, rings, etc., – which to us is not only possible but also need to collect, because it leads to the growth of recruited Willie points. If some mustachioed or not, the face took him just the same doorway that we need to wash, should go on their platform to another window of the same apartment and... get there its occupant by use of a whistle or semolina, pressing the key W. to More accurately define this musical instrument is included in the basic equipment of a professional window cleaner, it is not possible in view of not the highest quality sound design: supported only PC Speaker, and a special variety of his repertoire is no different (although with the task of informing us about the dangers and successfully washed the Windows speaker still cope, so turn the sound off by pressing Alt-S is unlikely).

But to put the game on pause via Alt-P, is sometimes very useful. Because we need not only to find dirty Windows and distract the inhabitants of the apartments from a profound observation of crows, but also constantly to evade the already mentioned dangerous objects rapidly falling from above. But there are still flying by bees and birds, which, if not bring down our cradle, you can rock it and push away from the window. When working on the lower floors of buildings to all these petty troubles to add and balls, throwing local kids and also able to bring down the platform a washer with the course. Waiting trouble bigger: to display a special window at the bottom left, with flashing arrows showing which direction at the moment, you can discover one of the most terrible evils for a representative of our profession – dove, rain cloud or the bomb. With the first, alas, can not handle: can only be doomed to follow a free flight waste his life, frantically clutching the hand of a strategic reserve of abrasive IXO. But the cloud is quite possible... to catch and neutralize, thereby not allowing contamination of some already well-refined glass. Finally, in later levels there are bombs that are put up on the Windows some irresponsible citizens and who have to find and deactivate again, simple and humble servant.

Just "Window Wizard", there are seven buildings-levels, in between which we are invited to gather bonuses, playing the version of "Arkanoid": action occurs in outer space, and is equipped with rocket engines the cradle need to Dodge flying computers and collect the falling of people or to shoot flying pigeons, trying not to fall while in other birds, etc. After the first bonus level the game will offer you to check for copy protection: going through the available answer choices with a "gap" you will need to press "enter" on the name of the color which corresponds to the displayed on the screen and the background card code.

Oddly enough, but abounding with such interesting and original gameplay elements the game has not gained virtually no fame, and few critics have accused her at the time, the simplicity and annoying boredom. Today the verdict was difficult to accept: boredom here and does not smell – with all the local difficulties and attractions – but the attribution of the "Window Wizard" in the category of entertainment designed for the young audience, really looks strange error authors. The job of a window cleaner – very difficult and very nervous: pigeons poop flocks; on the roof of some hooligans rocking our cradle, preventing the cleaning process and gets stuck on her stupid crows doing the same thing close to us; the computers and other hot dogs falling on top of one another incessant hail; and no sooner had we washed the troublesome window on the lower floor of the building, as somewhere above, has passed the treacherous rain cloud... Yes, difficult to work in such an environment. But isn't the complexity we love the good old arcade games?!

It should be added also that rare, despite the fact that came out several publications in Europe and America, the PC version of the game is even more preferable options for the Amiga and Atari ST almost everything, except sound and music: on other platforms were sold exclusively controls with the joystick, which is still less convenient than using the keyboard, and which may well have contributed to the traditions of this great game undeserved oblivion.

Relive your old memories by playing Window Wizard free and online on your browser now.