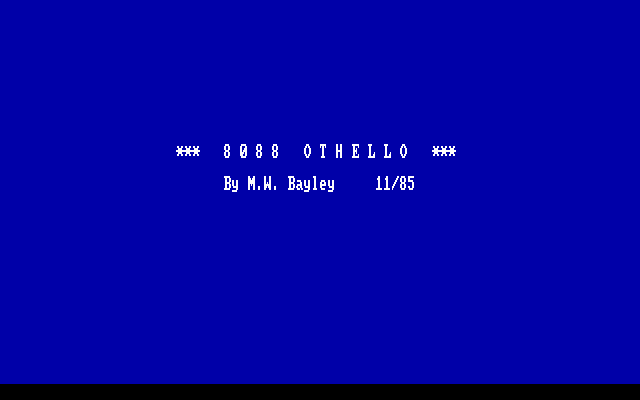 Great news for all the old video game lovers, now you can play the best Strategy/Tactics game, 8088 Othello launched by M.W. Bayley in the year 1985 again. Play it online now.

A very old version of the Board game Reversi also known as Othello. Played on a Board of size 8x8 chips white on one and black on the other side. Your chips should be placed so that they were connected with other, existing on the field (their own or other people's), horizontally, vertically or diagonally, while trying to surround at least one chip, and even a number of the enemy (any in terms of its direction) on both sides - in this case, all its chips will go to you. When all the chips placed on the field or when no players can make any move, the game ends; the winner is the one who will have more of their chips on the field.

This version of Reversi is controlled with the keyboard - you need to manually print the letter and number of the cell where you want to place a piece; you can only play against the computer. There are five levels of difficulty, and problems can arise even at the initial with artificial intelligence is all right. Graphics - the four-colour CGA palette, but more for this game, and don't need. 8088 Othello is now more of historical interest as one of the first computer variants of Reversi, but due to good AI and interesting just as an intellectual entertainment.

Relive your old memories by playing 8088 Othello free and online on your browser now.