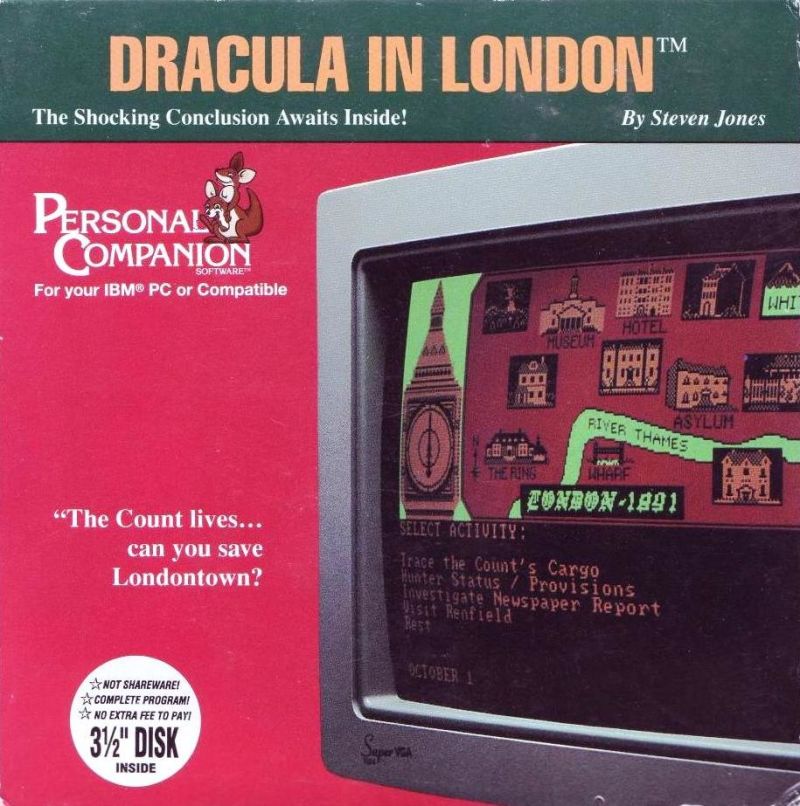 A very interesting DOS game was released by SDJ Enterprises, Inc. in the year 1988. The game was called Dracula in London. You can now play it online.

This game is both adventure and "computer Board game" (the real table have the original game too). It is based on the novel by Bram Stoker, "Dracula", more precisely – the part when the count is a vampire already left Transylvania and arrived in London (which is the name of the game). The game is based on the novel, and in any case is not his igroizatsiey (although some connection is still there): the six heroes (Jonathan Harker, his girlfriend Mina, Dr. Seward, van Helsing, Arthur, and Quincy is the seventh hero – crazy Radcliffe) have to try to stop Dracula. Before the start of the game is given a brief background and rules – at least the last it is necessary to read, because the game is quite difficult.

There are two main modes of play – "table multiplayer" and something like RPG-adventure, when the heroes are a team; naturally, at first it is necessary to consider the second option. Each of the characters has their unique abilities which he can use to catch a vampire: for example, to perceive a computer "tips" can only Jonathan Harker, while Dr. Stewart is able to crack various castles, and crazy Radcliffe is able to fall into a rage, giving him enough power to withstand even the vampires. Certain actions in the game can be made only after the necessary for their execution information (for example, you can't go anywhere without precise information about the place).

The basis of the gameplay is the search for secret hideouts to have a graph on the territory of London in which he slept during the day. All of these to the other party five or six, and they are located each time in different places, which greatly increases the replayability of the thing. To identify the resting place of a vampire can be as implicit hints that can analyze Jonathan and explicit, among which the finding of the coffins, and bats (which will have to fight). After the discovery of the resting places of the vampire should be destroyed using special sacred items and weapons, which, incidentally, will have to buy. And this applies not only weapons, but also just different things that may be helpful (e.g., flashlight). If the inventory group is any type of object, then, even if he is in the singular, it will be enough for everyone, even if its members are divided.

There is also a chance to face himself Dracula and kill him in battle. If you destroy all his places of rest for some time, but don't kill him, he flees to Transylvania, and you will follow him (and there will the final battle). If you fail to destroy all of his refuge – he will still run away, but for some reason you lose. Of course, in some places with shelters is just going to get, but it is here that you will need abilities (hacking, huge power or something else).

In addition, the game has a lot of random and extremely interesting circumstances. For example, the successful outcome of the case to a specific point in time may prevent a forced absence of one of the members of the squad due to illness of his relative or even arrested by the police for breaking and entering and trespassing in some place. Also each of the "hunters" need some time to sleep and rest. Finally, you need to keep in mind that crazy Radcliffe can bring your characters at any time and even kill them, and Mina hunt Dracula himself in order to turn her into a vampire, so it will have to protect. The victory condition is to survive all six main characters in the game (injuries do not count).

As for the first option there in the game playing six or seven people on one computer: they are also caught Dracula together, but each plays only for his hero. This character appears at the beginning of the game in a random place, and "period" games each – one game day, that is if the day one player finishes the game, and another takes its place, are already playing for their hero, but having the ability to use achievements of the previous player. The ultimate goal is the same.

If you want to say something about the chart – it is perhaps sufficient to say that it is there. The text in the game a lot, and reading will take up most of the gameplay. However, the interiors you visit, you too will be able to see in the small box on the right side of the screen, with the first person. Drawn all very arbitrary and sketchy, but if the game to understand (not so easy), she is able to captivate so that the graphical "flaws" are barely noticeable (this word reason is used in quotes because any true fan of computer variants of Board games graphics certainly is not important).

In General, the same – really interesting and sometimes even groundbreaking for its time, the game, one of the few created on motives of perhaps the best horror novel in literary history (and still tries, even in part, to follow his storyline), which, among other things, allows you to really play to a big company a computer.

PS: five years Later came the remake of the game under Windows 3.x, where the graphics were drastically improved and expanded.