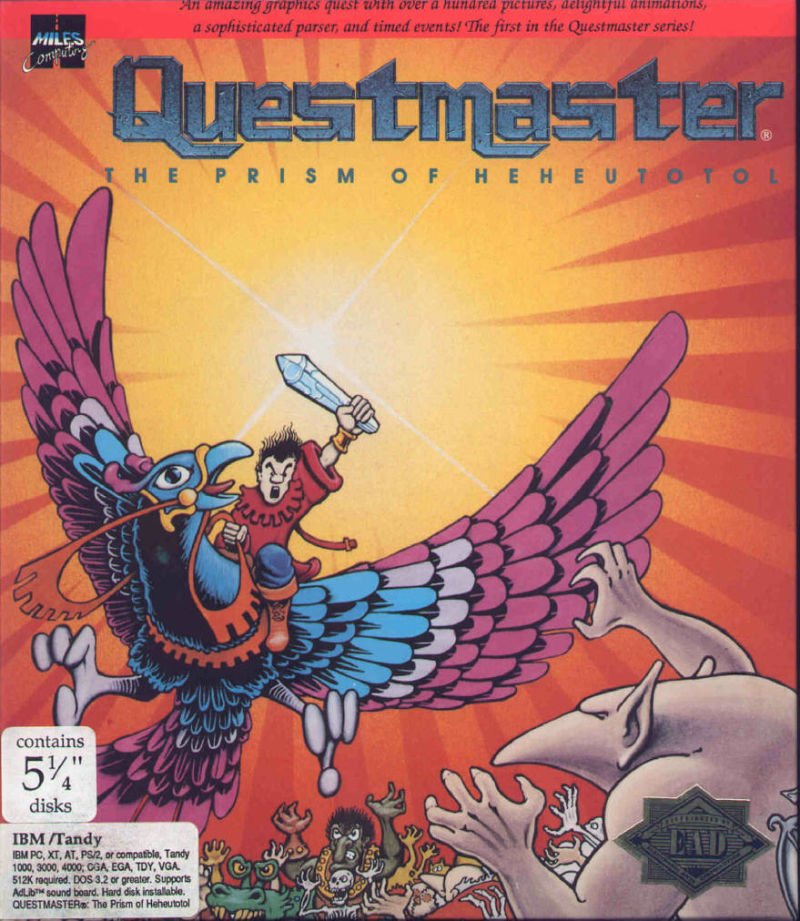 Click here to play Questmaster I: The Prism of Heheutotol online
5 /5

Questmaster I: The Prism of Heheutotol is a Adventure game released by GigaBit Systems, Sean Barger in 1989. It is an interesting DOS game and a must play for all old videogame lovers.

In the late 1980-ies the genre of adventure games has gone through multiple bifurcations in connection with the rapid development of computing power of home computers and graphic technologies. Interested in the public massively left the camp of fans of text quests and stretched to offering a beautiful picture adventure. Some developers Interactive Fiction realized which way the wind blows, and tried to hold the audience, adding to their creations what they wanted - high-quality graphics. One of them was the Gigabit Systems, tested this approach in two of its games - The Twilight Zone and Dondra: A New Beginning, which they ported to the Apple IIgs the effective participation of the Creator of the original, Sean Barger.

The story itself, constituting, it would seem that a significant part of the game of this genre, this is mediocre - we need to win a fantasy villain Kolnara, obsessed with the lust for world domination, at which he will stop at nothing. On the way to the goal, as usual, have to solve numerous unexpected puzzles and overcome deadly obstacles, is surprisingly few. But this is extremely important for the text quests, the item turned out not the most successful - all too easy, even despite the presence of local restrictions in some of them. The biggest obstacle is a text parser with which Affairs too are not the best way.

Not to spoil potential players out of the passage, take the examples from the beginning Questmaster I: The Prism of Heheutotol. We start in a room with several doors in the middle of which is a hexagonal pedestal with the key. On one of the locked doors are a cryptogram, and the inscription “Death to Colnar”; simply tell the character to utter this phrase - and there was a keyhole. Yes, you can spend some time deciphering the inscriptions, but more or less experienced player will immediately understand what it is. Inserting the key will probably be the first clash with the specifics of the local parser, which does not want to “open door with key”, but I want to just “open door” - that is characteristic, in different situations he does not understand such refinements, on the contrary, requires them to seemingly obvious cases. Next we meet the clutches of the undead, and will appear on the screen clicky jaw skeleton, which will require us to “speak”. What to do? To say the same phrase, and guess to do this for some time, or will eat. Not very logical, but not difficult. According to the same principle is built and further mysteries that become more extended and multistep, but not more difficult.

What do we do? Graphics. That's up to her to bring a claim difficult - it is very high quality, atmospheric and detailed, worthy to accompany much more quality project. The picture is definitely pleasing to the eye, abounding with the animation, and honestly reflects the results of the player's actions. But in the end the graphics for the text of the quest - the item is optional, and in the case where the developer relies on her and not on other more important components, the result is sad.

Despite the fact that the Questmaster I: The Prism of Heheutotol had two editions (the second with the addition of a gorgeous 256-color picture), the next game in the series (and you thought just because there is, whether that figure is?) the light is not seen - it became evident that to create a continuation in the current format does not make sense, and “retrain” the developers did not dare either because of financial reasons, or figuring out that they can't do it. Whatever it was, but the game remained in history and curious once it started working will not hurt to see it in the first place for the sake of image, which is very very good.

Now, play Questmaster I: The Prism of Heheutotol online for free on your browser and make your boring weekend fun and full of entertainment.

Click here to play Questmaster I: The Prism of Heheutotol online
Rating breakdown