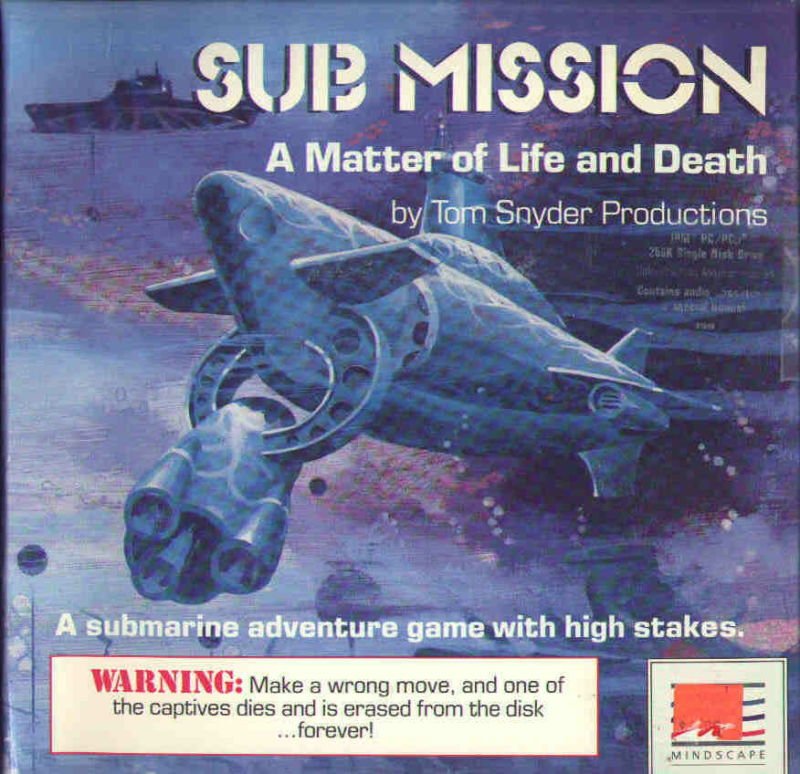 Mindscape, Inc. developed a DOS game in the year 1986 called Sub Mission. In the video game ranking, this game ruled the charts for a very long time. You can now play it again online by clicking here.

A brilliant adventure game, which takes place in the underwater world of the near (maybe) future. Its plot is seemingly primitive and far-fetched: a Lord (Warlord), living under water, was kidnapped by two people, Peter and Sigourney (for what purpose is unclear). You take on the role of a certain naval officer, tasked with a covert operation to secure their release. However, the Lord captures your character and invites him to play in the game. If he wins, it will be released and prisoners, and himself. Well, if you lose, then all of them will die.

The point of the game is that in a small submarine that is controlled remotely (you will operate), is placed one of the prisoners or the robot. Driving this submarine, you need to discover and capture with harpoon gun (which, among other things, also and not so easy to manage) the deep mine, and to do it early similar a small submarine controlled by the Lord. Then you need to bring this mini-submarine to our big boat.

The complexities and peculiarities of the game a lot. In fact, you have to defeat Lord only two times, controlling the boat with Peter and Sigourney; as soon as they have you both on Board – the game is won. However, the characters can die: they can destroy the submarine Lord at any point in time (where we should try to avoid), but also – from time to time it is necessary to give them the command to float to the surface to replenish the air, because they are very limited.

Logical question – what is robot and what is it for? Robot is a kind of "training option": the air he doesn't need, and even if the boat with him will be destroyed, then the game is lost will not just give another robot. Play with a Ruler, controlling the robot, many times, it's a "combat tutorial", so to neglect them in any case impossible.

To the same "party" where you will control the submarine with somebody of the prisoners need to be very well prepared. Because if this character will die – you will die forever, that is, information about it will be removed from the game floppy disks!!! That's what before the game did! To Sub Mission supplied an excellent and very detailed manual, read that for a normal game it is a must.

The graphics are very good, despite the fact that is supported only CGA-mode (though as an RGB and Composite-mode). The main thing – not how it looks, and the fact that it will appear to our eyes. The game screen is designed as a rear view of our protagonist (a naval officer), whom we see from behind sitting in the chair and Manager of the submarine, which, in turn, shows a cross drawn on the monitor. All the front-end of the scale (the display of speed, air supply and others) located on the sides. And it should be noted that it is quite unusual external design and creates a truly amazing tense atmosphere Sub Mission. Verdict – simply excellent old game, a truly original, fascinating, very complex and just not releasing from themselves, which can to recommend to any connoisseur of old masterpieces.

Want to play Sub Mission online now, play it on your browser here.

Moraff’s Dungeons of the Unforgiven