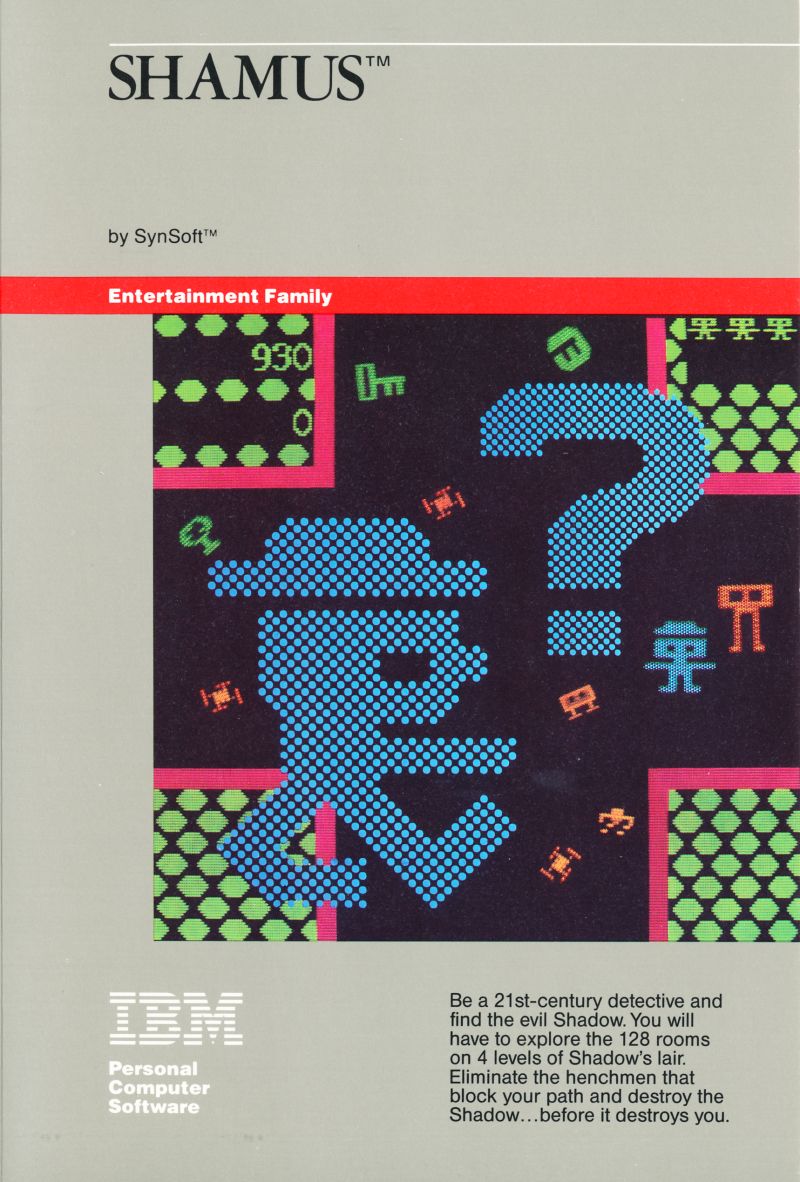 Shamus, a top-notch Action game was developed by IBM in the year 1984. This was a very famous and in-demand DOS game. You can play it online here again.

The game Shamus, appearing in the early 80-ies, was later ported to many platforms, including the IBM PC. Is an arcade game where the main character of the game - a robot detective who wades through the tangled maze of cybernetic enemies to defeat the main adversary. The walls of the maze are live - touching it is extremely dangerous.

Scrolling areas in the game - screenful at a time, and when you step into each room different security robots each time randomly respawn in it. Enemies can be a lot or a little, they can be far or close (if too many enemies and they are pushing something you can just leave the room and come back). Mostly in game three security robots: robotoid (robots, rolling on tracks), ski jumpers (two-legged robots move fast, chaotic jumps) and spiralkoy (slow roll on four spring legs-the tracks), but opponents may have different degree of mobility, different color, and, most importantly, some of them can shoot. Touching the enemies or their projectiles for the main character deadly. Interestingly, the shots of the enemy mechs, if they hit the other enemies, kill them the same way as the main character, and that you can sometimes take advantage of.

The main character can move left, right, up, down, and diagonally. He's not unarmed - even more likely, armed to the teeth with the latest firepower of the YEAST system or Hand Weapon Disintegration (a free translation of English abbreviations SHIV - Short High Intensity Vaporizer).

To be precise, under this terrible name refers to the ability to shoot in any of eight possible directions of movement of the character: for this, hold down the Alt key you have to press one of the buttons for movement (cursor buttons and the diagonal numpad'e). Another method of shooting - moving in any direction, quickly press the Alt key, but in this case, the character will gradually shift in the direction of fire, pausing for time works shots. The shots of the robot agent always destroy the enemy in one hit, but they disappear at the same time - to destroy the crowd of enemies with one shot will fail. It is also important to note that the screen cannot be more than two shells of weapons of YEAST; for this reason, shooting fast bursts is possible only at close distances in a crowd of enemies from far distances will have to be limited to the line for two shots (to produce a new category only when one of the two already present on the screen will disappear, once the enemy or the wall of the maze).

If the robot-agent is too long on the screen, first sound a warning sound, and moments later I see the shadow of the main villain of the game. Unlike ordinary enemies, Shadow can't shoot, but has the ability to move quickly, freely passing through walls and floors of the maze and aggressively pursuing the main character (needless to say that touching this enemy is also in danger?). Shots firing system YEAST cannot destroy the Shadow, but for a while paralyze the enemy, slowing his movement. To escape from the Shadows, enough to go in the other room - timer for his appearance on entering the room each time is launched anew.

At the entrance to every room, reborn not only enemies, but also the location of the provisions for this room bonuses or keys if they are there (i.e., at each entry to the bonus room, if you have not taken, will change their location on the screen). Bonuses are only two kinds - the Mystery (looks like a big question mark) and Extra Life (looks like a bottle with the elixir). Mystery, as the name implies, can produce different effect can give the hero bonus points and/or one extra life, but this can sometimes immediately trigger the screen Shadow. Extra-Life is, by itself, gives the character one extra life. Keys are numerous, and they differ from one another by the teeth, and every strictly only applies to his castle, which will be the appropriate form of a keyhole.

All in a maze of 127 rooms, divided into four levels. Each room has its own room, and the game tells the player in the room which number he is (so that, sketched a plan of the maze, get lost in it will be quite difficult). In the latter, 127-crowded room awaiting the main villain of the game, and if the agent has enough strength to break through, weapons at this time will not fail. The game has two difficulty levels, and the ability to use the joystick (these options are selected at the beginning of the game).

The PC version released in 1984 - so, naturally, the special beauty of the graphics or good music it is not. Music for the PC-speaker is in the Intro, but on fast computers, or when fast emulation through DOSBox it will run so fast that there is nothing to see or hear will not be able (to resolve this problem, it is enough to slow down the game, reducing the number of cycles in DOSBox); the game also sounded the tramp of the player, the sound of gunfire, the taking of bonuses, etc. - of course, also via PC speaker, but the difficulty of the game, the atmosphere and the continuous action are at the level of his time. When nezamylenny the game agent management becomes complicated - sometimes the agent stops immediately upon releasing the pressed button for a long time of movement, and it takes a few steps that can be lethal, given the danger of touching the walls (in DOSBox the problem is simply solved by slowing the game).

If you are a lover of old classic games that you might like to break through the room, destroying crowds of hostile robots, remembering the location of the maze by collecting keys and unlocking the right door. To understand the attitude to the game, enough to go through several screens - will continue in the same spirit, if the spirit of the classics you hooked to play. If you are looking for beautiful colorful graphics, fancy music and sound effects - they are not there.

Play your all-time favorite Shamus free on your browser here.