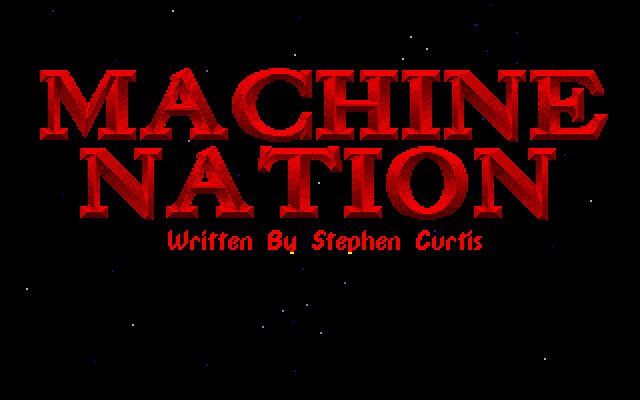 Do you want to relive your good old memories? Play Machine Nation again, it’s a perfect DOS game launched in 1996 and a must-play for all video game lovers.

Ingenious "vertical SMAP", created by one person and distributed on a shareware model; unfortunately, on our site the game is presented in that version, and even the discovery of this version - and it's phenomenal luck (for the sake of interest try to find it at least some information). Not too pretentious epithet used by the earlier proposal? Oddly enough - no. We have before us an example of flying with the top view, where you have to think - after analyzing a certain amount of background information; if this is not done you will not live more than a few seconds. To think, however, will have for gameplay, and born in the brain of thought must be transmitted in the form of agile teams (and only such) fingers quickly. Very quickly. Otherwise a death. No plot no, because it is not needed; the action takes place in the open space above is not the asteroids, not combat platforms, and you need to kill enemies - it's all quite traditional, expected and more than enough to justify what is happening.

Let's imagine that Machine in the Nation sat down to play "father hardcore", which obey all the flying even with the Golden time of arcades. Of course, he immediately, bypassing all the other menu items, go directly to "Game" - and his eyes appear self-moving airplane, not too big screen with "settling" somewhere at the bottom "base" - and opponents (other airplanes of different shapes and sizes). What will he do? Of course, immediately begin to maneuver, especially as the shooting goes automatically! The result - instant death after about one second, with more luck three. However, no one enemy we haven't faced. Maybe at the bottom of the turret - it is found in mapah? A bearded fat man restarts the application, and no, there are no turrets! And the result is the same - death. Immediately. After several unsuccessful attempts, he Willy-nilly go in familiarity with the menu item "Help" (and it is better to file "Readme.com") - and here...

Yes, this - exactly this - we seem to do not seen. Machine Nation is, so to speak, "one-dimensional" of SMAP. Of course, the "science" a term to use, but nevertheless: the fact that our plane and everything is drawn "below" the objects really are in one plane, while in fact the latter have different heights (us-defined), and sometimes some special properties. In practice, this means that freely fly here in any case will not work: the boat will just shatter in collisions with certain types of landscape or in "contact" with something - who would have thought (without examining the above-mentioned "help page") is dangerous. But it's not even the tip, and the small peak of the iceberg.

The airplane can gain and lose height, - visually it appears to increase and decrease its size on the screen, respectively. And, just so you can't do that - only an exact flying over certain marked surfaces. In each of the modes has its pros and cons: for example, in the "low" flying enemies can't attack us (and we them), while fuel is consumed much faster (Yes, fuel capacity is limited), and in several situations you will have to quickly react and manage to move it to a certain height, otherwise, it will simply not go through. In the same way is the situation with a set speed or slowing down - sometimes it's critical, but it is possible again only after passing over the concrete surfaces. Ammo basic weapons, luckily, the infinite (which is not true about the other two, especially about the most powerful, the number of simultaneously available charges which can not exceed five).

In total you will have to memorize (!) appearance as many as fifteen types of unique objects on the screen. For example, two kinds of generators of force fields, which (alongside several others) must be avoided, because the fly over "them" (the concept in this game, we recall, very conventional) inevitably leads to destruction - as well as periodically "switches" of these fields (and if we did not see such a thing and not flying over it in order to disable the field, then pass just will not work, because for the promotion will be intended only a "corridor" with a width of one cell, arising just at the site of the deactivated generator). And so on (including this category refers to the above surface to change the height and speed of flight), but "lives" on the whole thing is given only three, while death occurs in the case of any inappropriate action, whether a collision with the enemy (shoot, they can not!) or with a trivial projection of the structural element of the building, as well as "flying is not there." Bonuses that give extra "life", is (squares with plus sign) - but they are very rare and did not alleviate the overall situation. And Yes, repeat: fuel is consumed, and quite quickly, and it is also necessary to have time to fill in collecting the relevant bonuses. On snack - the subject of a "stop scrolling", allowing you to briefly pause the automatic scrolling of the screen, which sometimes also happens, you need to be somewhere to return to performing important actions (all listed and Unlisted entities are among the fifteen objects). And yet - the attention is "just a bonus". Only it was not enough for full happiness, as they say...

So, let's summarize (although all the threats and opportunities described above have not been) before us seems inconceivable, but still really existing "shmup of the puzzle", where the essence of the gameplay is not maneuvering; where it is often safe to fly only on a single (and invisible) narrow strip of the screen, where instant death lurks in the literal sense of the word at every step; where you need to constantly keep in mind the appearance of different objects and for a split second to understand what and how to do; where we are forced to think about spent fuel, the number of available "lives", to put it mildly, ridiculous, and to get hold of additional very difficult; where, finally, there are generally no exemptions, with the exception of the already mentioned inability of the enemy to a remote attack, enable viewing of the demonstration of gameplay (highly recommend to do it!) and - again, hardly the usual Shmatov - mode "pause": press "W" all will freeze and you will be able to think and assess the situation, having considered the sequence of her actions after the process is resumed. And to put it into practice quickly have.

You still want to play it?.. If suddenly Yes, then note that it is executed in a very nice looking VGA graphics and has a clear drawing and quite beautiful visual effects of explosions and gunfire; of course, that to enjoy this will not be the slightest opportunity.

...Steve Curtis, author of Machine Nation, in fact, didn't conceal that he made a "game of dreams" in the first place for himself and focusing on the difficulty in passing. Moreover - he even offered to write him, if it seems way too complicated (or Vice versa - simple). And the money was ready to send the full version, where, in addition not included in the shareware-version of levels was accompanied by additional sound modes and an editor for creating your own levels. Apparently, no one, nothing moved...

Total: furious in its complexity "the indie thing" with almost no target audience. Designed exclusively for superhumans, consciously willing to take the feat in overcoming the very real martyrdom, which threatens to become its passage. And keep in mind that - due to the format of the posted version - it is up to the end even them do not succeed.

And otsenochka will be ten. For worthy and deservedly so.

Enjoy playing Machine Nation online, it can be played on your browser and is free.