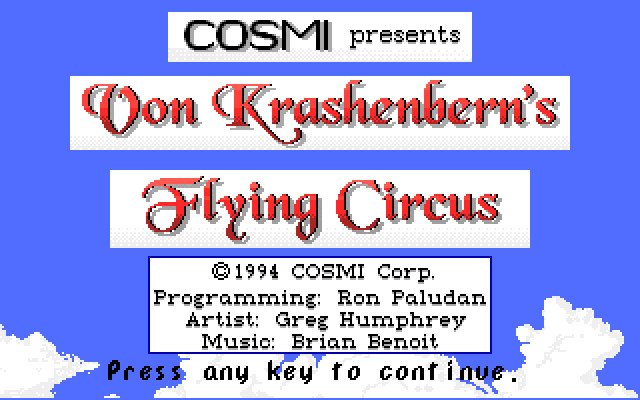 Extremely rare game uncertain genre at the intersection of simulator and arcade. On the one hand, it is not the simulator: side view control (formally!) not very challenging (from the point of view of the number of applied keys), the plane (just plane) depicts almost a caricature. On the other hand, it's still not quite arcade, although, of course, much closer to her.

About the story we can only guess. Apparently, the action takes place during the First world war, and we're playing for one of the aces of the Royal air force. And we have a mission, but to execute we will not just so, and while competing (!) with an opponent (that is, for some it's war, and for some entertainment...).

The difficulty starts when you start. In front of us airfield with a few buildings in the barracks are required to make and confirm your choice of pilot in the staff – to choose their opponent (fun stylized black and white photography portraits) and get a mission on a mission (chosen, apparently at random: it could be a bombing of some targets, patrolling the area, protecting the train and so on), then - a hangar - is pre-training, after which begins the actual departure.Control pretty hard, even though the underlying control is a cursor arrow (ascend, descend, turn) and Enter (to drop bombs). A loop can do.

Graphically, the game looks, as has been said, cute, but still very much cartoony and not serious: it might even have been calculated on children (although it is in this play will probably not afford), even in case of the crash the pilot did not die, but should only amusing scene in which the officer chastises him for failing the task.

Verdict – first and foremost, this game is valuable for its amazing and rare that's not listed in any database games. But the gameplay here is also very entertaining, the main thing – to understand how to start the game, and in any case do not expect from it any serious "simulation" of the first combat aircraft. This is just an entertaining thing, sometimes very difficult.

Do you want to relive your memories and play Von Krashenbern’s Flying Circus online in your browser? Play it now for free.