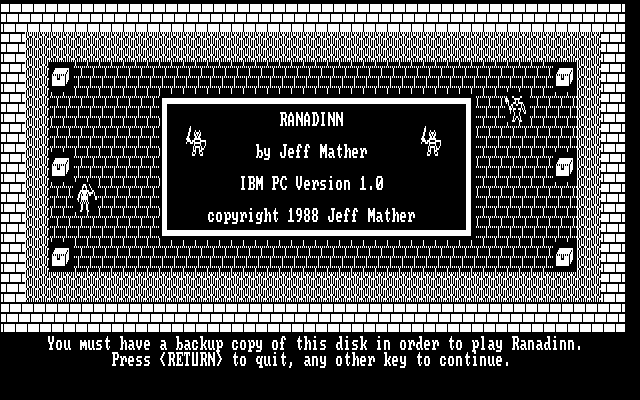 Great news for all the old video game lovers, now you can play the best Role-Playing (RPG) game, Ranadinn launched by Jeff Mather in the year 1988 again. Play it online now.

A little-known but very interesting role-playing game created by one developer and evoke memories of dashing the days spent in Akalabeth and the first Ultima parts.

At first glance, the game looks quite modest, however, even a superficial acquaintance with Ranadinn demonstrates considerable effort with which the author approached his task. Current events are preceded by long-winded and extensive guide, which provides a history of our character from early childhood until the present time. Recount here all the details does not make sense, especially since the manual is written in beautiful and literate language, but a brief version of the events sounds like this: our hero is a very skilled fighter and mercenary who took the title Ranadinn. That word symbolizes his skill in many arts – the skill with a bow and blade, practical magic and communication with the divine world, which allows Randino to read magic scrolls and use magic directly in battle, thus gaining a distinct advantage over the enemy. Behind him a lot of fights, but now, in times of peace, not where you can find a use for his talents. So when she heard about the war brewing in the island Kingdom of Argentan Randin immediately embarks on a journey and joins the troops of the local ruler. Then it turns out that the attackers of the army marching under the banner of an ambitious and powerful wizard and stop him getting to our hero's sense of honor. In search of the approaches to the enemy you have to travel to the Islands, to look for peaceful settlements and no end to hone his martial arts, preparing for a final battle...

The game world consists of cities and open spaces. First perform a utilitarian function and are mainly used for the sale of trophies and replenishment of supplies. Not to mention their dimensions – in most of cities lives up to hundreds of characters, each of which you politely greet or share the latest news about everything that happened in the area. Then you can heartily pomaroderstvovat and to bring derelict weapons, supplies, and magic scrolls – local vs do not mind. Outside habitable spaces, you will find endless fields, forests and mountains full of the most diverse and hostile creatures. Battles take place in a minimalistic form – just enough to get up close to the enemy and press movement until, until he will disappear from the map, giving us a handful of experience. No "pumping" of the character can not escape, since the most powerful spells can be read only with the appropriate intelligence and wisdom. And other characteristics of the skilled Randino is also necessary – the enemies are not joking, and sometimes knocked out with a few strokes.

The game palette is not rich (although there is the ability to switch colors), sound set also not surprising variety, but the gameplay is enough fun to forget about these shortcomings. Much worse is, how does the game saving system. When changing locations Ranadinn automatically records your progress somewhere in the wilds of your executable, so if you later want to start the game from scratch or to replay a bad moment, you will have to create separate copies of all the files and overwrite them current.

And of course most importantly – game version 1.0, was distributed initially had a critical bug that prevented to plot a line to the end. This bug was discovered too late, so at the moment anywhere on the Internet you can't find the corrected version Ranadinn. Anywhere except our website. Jeff Mather, the developer, has provided for us the fixed version number 1.0 a, which works as intended, for which we owe him gratitude. So now Ranadinn you can play fearlessly.

In General Ranadinn is not a revolution in the genre, but interesting enough to give the game a chance and devote some time adventure in a far off Kingdom. Full of danger and romance the life of a mercenary you provided!

Tired of your same old routine, want to add some entertainment and fun element in hour life? Play one of the best videogame Ranadinn online now and change your boring oold routine for good.