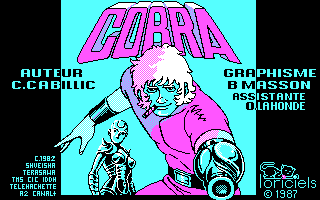 Rare and officially even non-existent port on PC arcade-exclusive for the platforms Amstrad CPC based on Japanese futuristic anime. The protagonist of the game – space pirate named Cobra (Cobra) acting together with his co-worker Lady Harmanoid, a female robot. In this game, their task is to rescue Dominique, a lover of the Cobra, from the clutches of the villain and Salamandar'.

The game itself – at first glance psevdoastmatichesky arcade shooter (perspective review, it is also extremely unusual). The basis of the gameplay – the destruction of any moving objects, and finding the door to go to the next screen. Extra lives there is no bonus at all (!), but there's a pretty decent supply of "life force" (that is, once you're killed). More interesting – in this game you have to simultaneously control both characters, constantly switching between them, because both needs simultaneously to fight and to use them only available weapon.

As "extreme" weapons used the grenade five pieces for each character. The game also has elements of stealth and tactics, which does not allow to call it primitive: often the screens will arise all sorts of obstacles that can be overcome, but you can hide behind them and fire at enemies from there (and it sometimes is very important). Also an important role in the game play walls – when they fit, then the characters somehow change. It is very important to choose the right way regarding each wall – otherwise you can fall into a deadly trap.

Graphically, the game looks at least interesting. There are no backgrounds at all, the character models and objects are drawn does not matter, but in all this there is a unique kind of charm. However, an interesting game will most likely only collectors.