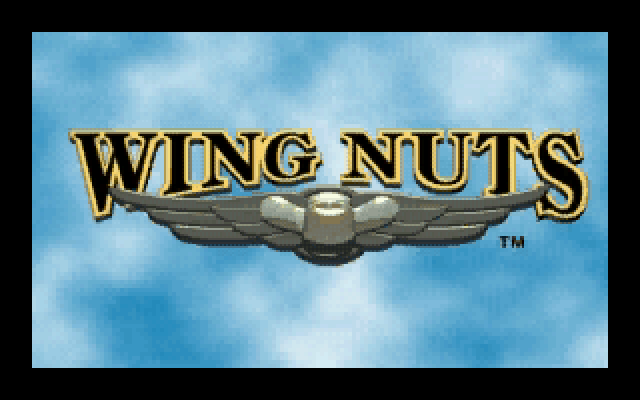 A DOS game was developed by BMG Interactive Entertainment and then released by Rocket Science Games in 1995, the game was called Wing Nuts: Battle in the Skies. Now you can relive the memories by playing it online here.

Virtual shooting range – this is probably the most common genre of "one-button" games. At the time, the developers have created many such things, however, most of them dull and monotonous. Hardly anyone can remember a good virtual shooting gallery era before the advent of CDs, not we will find them and at the tops of critics. Somewhat different stage of development of the genre after the wide spread of CD. It would seem that here is room for the application of FMV, special effects and themed soundtrack. And indeed someone tried, but... Despite the success of American Laser Games, the genre took off. But Wing Nuts: Battle in the Skies tried, and including in the literal sense.

Half the time that would be required to fully complete the game, is very well shot videos from playing (which is rare), though not brilliant, actors. Starts the story with the fact that the main character, an American pilot, located in France and engaged, apparently, the main purpose of his visit is resting on a picnic with a French girl. However, soon the idyllic picture is interrupted: rushed on a motorcycle French colleague reports that the Kaiser's Germany began open warfare, therefore they need to immediately arrive at the military airfield. After receiving the introductory and combat mission to locate and destroy German aircraft - the pilots are seated in biplane and take to the air.

Here starts the gameplay. First, our plane sits on the tail of the enemy, and the player's task – to have time to inflict the greatest possible damage from the bow guns, while the enemy will not be able to make the maneuver and to go to the rear of our plane. In this case, the camera switches and now you need as quickly as possible to shake off the pursuer, which you need to click on the edges of the screen in the desired direction, otherwise quickly go back to the firing position will not work. Thus it is not necessary to forget that in the virtual dash we can't control the movement and just shoot. Oh and to follow the margin of safety of the aircraft, the number of lives and the overheating of the gun.

Only thus will go through six missions, which will be interspersed with story cutscenes. Except for the three times will give the ability to destroy ground targets with bombs. However annoying the game can't keep up. We must pay tribute to developers - they have correctly calculated the time that can captivate the player: it's 40-60 minutes, during which bored certainly do not have time. Keep the screen is not only done efficiently and with humor videos, and short one-touch excitement of air battles during the First world war, but in General a certain lack of seriousness of what is happening. For example, in the midst of battle on the screen may appear bonuses that if they shoot, will serve as health packs, temporary invincibility, or becoming a machine gun to a plasma gun that deals much more damage.

The game leaves a very pleasant aftertaste. Here you have the opportunity to stretch their legs brush, crawl the mouse, and high-quality FMV, and humor, and brevity, and rare, especially in this genre, setting. A very good mixture.

Now, play Wing Nuts: Battle in the Skies online for free on your browser and make your boring weekend fun and full of entertainment.