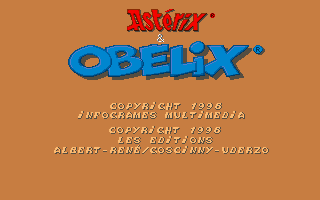 In 1996, Asterix & Obelix was released by Infogrames France S.A.S. with a very interesting Platform. This you can now play online.

The company Infogrames is famous for its games based on the popular Franco-Belgian comics. Adventurers Tintin and Spirou, the mysterious long-tailed animal Marsupilami, tiny Smurfs - these little books are read all over Europe. Not escaped this fate and Asterix with Obelix (but the game about them out before).

The plot is based on the aforementioned comic book: the year is 50 BC all Gaul is occupied by the vile Romans. And only one small village held back their onslaught with increasing strength of the drink (which is the "hallmark" of Asterix). And, it seems, they lived happily ever after. But the Romans, not long thinking, has built small houses around the whole camp! Then the Gauls decide to prove to Caesar that they are able to cross the border and go even to distant countries. As evidence - coveted souvenir. Gathering his thoughts, the leader of the village Vitalstatistics sends Asterix and Obelix in different provinces of the Roman Empire.

So, Asterix & Obelix made in the genre of "platformer". There are one-and two-player (you can choose who will control Asterix and Obelix who). Between the characters there is a significant difference. Asterix - very fast and agile, but against particularly strong enemies he is the most magical drink. Obelix is the complete opposite: sullen and slow, but the drink is not needed. The main enemies are poorly armed legionaries who literally fly into the distance with a single blow. And have them "modified" versions - for example, moving in chariots. In addition to the notorious Romans on the way to meet and the other opponents - the Spartans (which are so much fun to fly in the sky), the pirates or Egyptians.

By the way, will test your incredible power not only enemies, but also appear on levels the blocks (a great analogy - the bricks in the game series Super Mario Bros.), in which to store the coins (where the same without them) and other "Goodies".

Levels contrast well with each other - hot and bright in Egypt, foggy and dark Britain (it is British), snow-capped mountains, mesmerizing with its pastel colors of the forest, even a pirate ship. Also there are sports stages in the story our heroes will take part in Rugby, in Spanish bullfighting, as well as in the Olympic games.

On the chart. Drawing looks great, the backgrounds and characters are carefully transferred from the original comic books, including caricature. The plot is narrated in the beautiful cutscenes and the description of a level.

Is to pay tribute and musical accompaniment. Most of the tunes are set up aggressively and majestically, with a small hint of peace and tranquility. Some of them used folk motifs.

Summarizing, we can say: Asterix & Obelix - very good game. Perhaps many gameplay seem faceless, and the plot is commonplace, but for a representative 2D platformers of the mid-1990s quite well. And, in the end, who doesn't want to be in the shoes of iconic characters and popular comic and later animated cartoons and feature films?