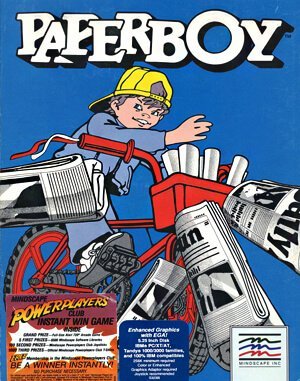 Click here to play Paperboy online
3.8 /5
The player controls a paperboy on a bicycle delivering newspapers along a suburban street which is displayed in a cabinet perspective (or oblique projection) view. The player attempts to deliver a week of daily newspapers to subscribing customers, attempts to vandalize non-subscribers' homes and must avoid hazards along the street. Subscribers are lost by missing a delivery or damaging a subscriber's house.

Paperboy is a 1988 arcade game developed and published by Atari Games. The player takes the role of a paperboy who delivers a fictional newspaper called “The Daily Sun” along a suburban street on his bicycle. Play Paperboy online!

The object of Paperboy is to deliver papers to your customers while inflicting as much damage as possible to the houses of your non-customers. To make things more difficult, numerous obstacles get in your way including construction workers, rogue tires, skateboarders, dogs and cats, cars, and even the occasional tornado.

The game begins with a choice of difficulty levels: Easy Street, Middle Road and Hard Way. The object of the game is to perfectly deliver papers to subscribers for an entire week and avoid crashing (which counts as one of the player’s lives) before the week ends. The game lasts for seven in-game days, Monday through Sunday.

You can play Paperboy online here, in web browser for free!

The Usurper: The Mines of Qyntarr