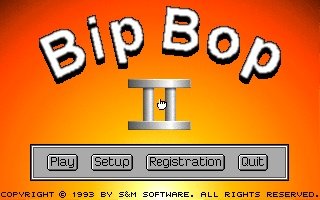 BipBop II is a Action game released by S&M Software in 1993. It is an interesting DOS game and a must play for all old videogame lovers.

The second part of the game BipBop subjected to significant graphical changes and confidently claim to originality. Big brother was quite boring, despite the fun idea with the holes in the ceiling, while this game is as close to the classic breaking bricks with a ball, albeit with some author's liberties. Let's face it: BipBop II is one of the most unusual types of arkanoid.

The game includes absolutely all of the usual rules, but differs from its predecessor in appearance. The first thing that catches the eye when meeting with BipBop II is the size of the ball: it is much more than those that we used to see in arkanoid. To say that it facilitates the main task, it is impossible, especially when you consider that the platform width slightly greater than the diameter of the flying red destroyer.

The architecture of the levels is rather poor: rarely seen map, where would more than a dozen blocks. I think it will help you? Absolutely wrong! Each brick has a picture of the Roman numerals denoting the number of strokes required to destroy the object. Sometimes the map can be blocks with a portrait of "Goblin" (the authors call it that!), touching which increases all Roman numerals into a single unit, so quick to finish this level is extremely difficult, because we still remember that the ball behaves like a bull in a China shop? Also doesn't help brick with the exclamation point (so-called "Shock"), which do not undertake to predict even the authors of the game.

Another feature of this strategy: the platform is able to shoot huge bullets! Now you will start rubbing their hands and a sly smile, but do not hurry to rejoice: the shells is no way to hit the blocks and are used solely to change the direction of flight of the ball. Of course, this option often is to our advantage: a brick sometimes hiding in a remote place, and the red destroyer sometimes fixate on the same trajectory.

Despite the constant feeling of ambiguity and absurdity, BipBop II turned out quite playable, and lovely, shimmering "mushroom" backgrounds will not irritate the eyes of the player, because the speed of the process does not allow to take my eyes off the red ball (it's like he's made of soft foam-rubber!). About the musical accompaniment, even in a text file with the information written: "Nobody. There isn't one", so we will hear only when you touch the unit which will sound as "beep".

BipBop II is not very much difficult game – rather, it requires perseverance, however, it would not be arcade titles, if the complexity of its over time, not increased. Want to kill time try this thing.

I, Damiano – Wizard of Partestrada