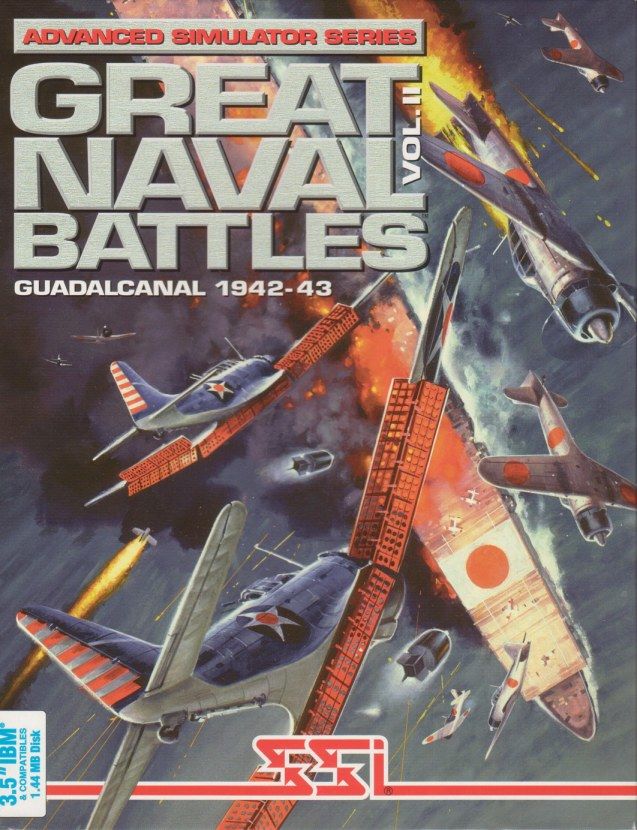 Expert Software, Inc. released a DOS game named Great Naval Battles Vol. II: Guadalcanal 1942-43 in the year 1994. If you are interested in playing this Wargame online, then click here.

The second part of the famous in the narrow circles of a series of nautical war-game simulators. As the name implies, it is devoted to the battle for Guadalcanal in the Solomon Islands during the Second world war, which began in August 1942 and became a kind of "beginning of a turnaround" in the Pacific theater of operations.

The game includes two campaigns with seven scenarios (all of them on the real stages of the battle) and several training and quick missions. You can play for the United States and the Japanese Empire. The interface hasn't changed much since the first games in the series, remained unchanged and the main principle - to manage practically all of the features of each vehicle, up to, for example, torpedo tubes (provided of course that they are on a particular type of ships). An important innovation was the availability of the elimination of damage to ships: it is implemented in the search form on the plan of the ship designated enemy bombs or torpedoes and the adoption of urgent measures (fire-fighting, the inclusion of nearby pumps for pumping water (but so that they not swung the ship)...). However, "manual control" global things, such as moving a squadron here (as it should be in the wargame) no - you can only specify the direction of the route and specific objectives. As there is any visualization of the battle.

Very pleased with the diversity of equipment - we are more than one hundred types of ships and 20 naval aircraft (of course, in the game, rather than a lump sum). Not less happy (although someone, perhaps, Vice versa) the quality of the graphics, especially in the mode "simulation": we can observe the enemy fleet with the first-person view from the bridge and from the Board, to manage different kinds of guns designed to different screens, monitors the level of the resulting vehicle damage is also a separate screen; it is bright and colorfully decorated. At the same time "wargame" is just very minimalist and is presented, in fact, only some statistical summaries Yes "Windows" with a list of orders. The disadvantages of the game include except that the low study of artificial intelligence opponents, and of the fact that the game itself is much more similar to conditional and purely tactical simulator simultaneous control of multiple ships, than a full wargame. But if you just like it and was looking for this game you may not like it.