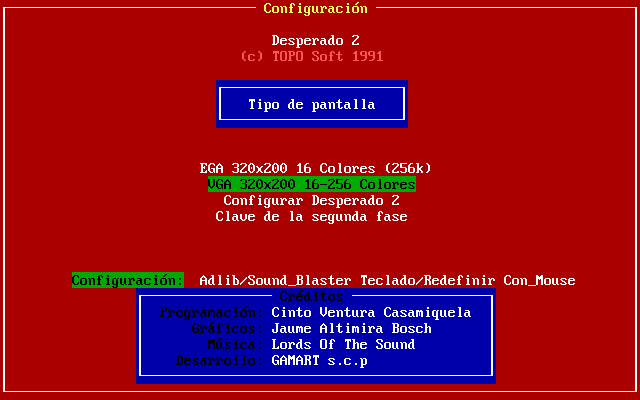 With many different features and various levels, Desperado 2 released in 1991 hit the right chords right from the beginning. Play this excellent Action game and online now.

The Spanish arcade game is a continuation of the much more well-known, but not released on PC game Gunsmoke. However, like her a little: at this time we are just very complex and difficult platformer in the entourage of the Wild West, where we play for the Sheriff, fighting bandits. Call the Sheriff if someone is interested, James Marshall and town that we need to clean from the criminals, called the Devil Stone.

The game begins with the fact that we go out of our house for the job (on a horse, but the town somehow already are operating on foot). Around us the sea bandits, both on the streets and in the houses and on the roofs; our task is to shoot everyone you can, and avoid the shots of those who can not, simultaneously extracting the bonuses. Stock the Sheriff's life can be assessed as average.

However, this mode - running on city streets and shoot the bandits with side view - this is only the first part of the game. If you manage to pass it (and to reach this Oh so easy), then you are waiting for the second part of another game mode - a virtual shooting gallery in atmosfernye the saloon with the first person (already, I see, simpler than the monstrous street shooting).

Graphically, the game looks good, but it even somehow overlooked because of its very fast pace. Verdict – in Desperado 2 is nothing special, but given the relatively small number of arcades on this subject and it is really a serious difficulty, for lovers of the genre, it is of undoubted interest.

Management, as in any Spanish old game: O and P – move, space – shooting, Q – jump, pressing the A button, the character just raises his hand with the gun.

Now, play Desperado 2 online for free on your browser and make your boring weekend fun and full of entertainment.