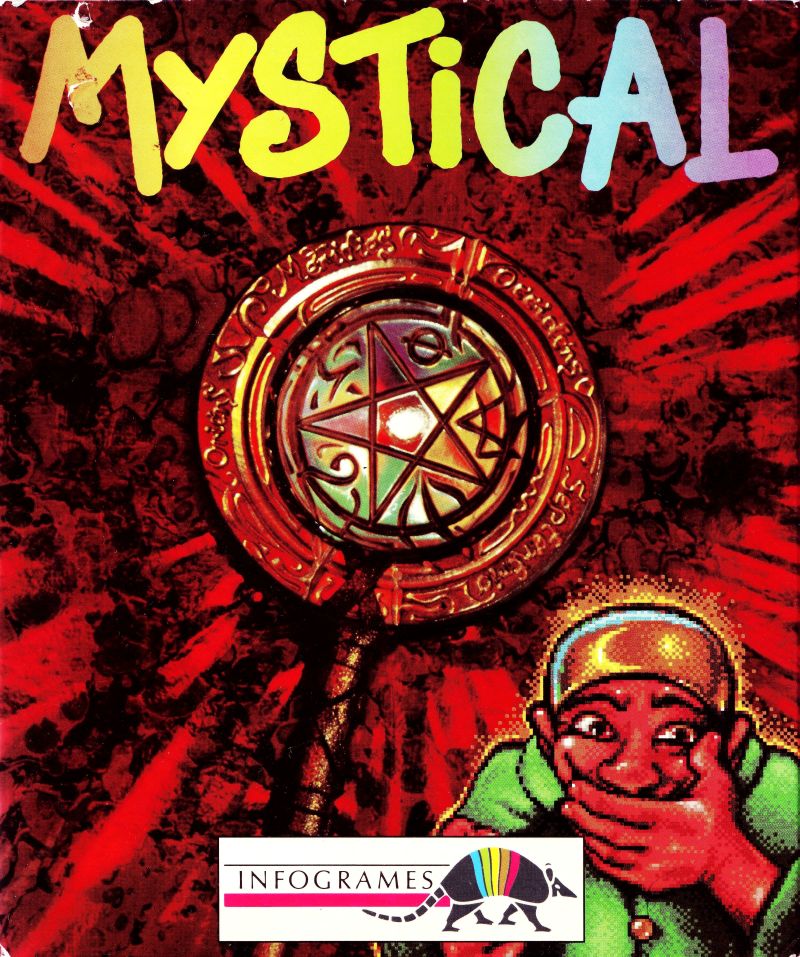 Infogrames Europe SA released a DOS game named Mystical in the year 1990. If you are interested in playing this Arcade online, then click here.

Diamond Amiga arcade adventure classic, just a miracle at the time ported to PC (not to say that 100% successfully, but still) and, until very recently, considered officially lost humanity game.

Your hero is the Highest Magician (Supreme Magician). More precisely, he believes himself to be. His dream is ironically, a good place to live (!). There will be no saving the world and other heroics here – striking and netrivialnye for computer games theme – the search for a better life. The explanation is that our Magician lives in the most terrible and disgusting place in the world – the Swamp of Eternal Stench (it really is called), but he knows that somewhere far away is the Garden of Eden where plenty of food, and the air is fragrant with flowers. And now he decides to leave the Swamp and find this mythical Garden, which remains to be done is huge and full of dangers way through a Mystical World inhabited by many terrible creatures hostile...

To call Mystical arcade does not – this is a mixture (though very competent) arcade and adventure game. The prospect of review here is also more than unusual – as if "a very high third person," something between isometric and top view. The important thing to remember before beginning the game, the enemies here are a lot, much more than the average arcade game, so killing all is not possible, many have to be avoided.

Fight monsters with bare hands and feet, no weapons in the game there is only the magic that is presented here in the form of scrolls (available to collect). Read the spell killed the monster. There are also a number of bonus features; the most important, of course, are the medicine of restoring health. No puzzles here – just passing the screens, but exactly what of the battle (and sometimes avoidance of these battles), there are often very complex and require considerable involvement of the brain, and allows you to call Mystical "almost" adventure.

The main advantage of the game – without a doubt, the enemies that is very a pity to kill so funny and cool they look. Instead of the promised "terrible monsters" on our way to face big nose monks, doctors (!!!), the ents (an infinite number of "!") and many other similar creatures. At the end of each level (and I must admit that the large levels here) we will have a huge and more than a charismatic boss. After passing each level summarizes the statistics of murders.

The graphics are gorgeous, even the DOS version (of course, if we're playing the EGA version) – corporate "amigne" the charm of the color palette captivates immediately, all traced though not perfect, but very clear and beautiful, and no level is like another. Play hard, but quite interesting.

Any verdict to make, I think, not even worth it. Mystical, more than deservedly received the highest rating not only as an example of great old games that can seriously captivate every fan of such entertainments, but also as an example that nothing is impossible, since even such a treasure, seemingly lost forever, is once again available to all mankind.

Do you want to relive your memories and play Mystical online in your browser? Play it now for free.