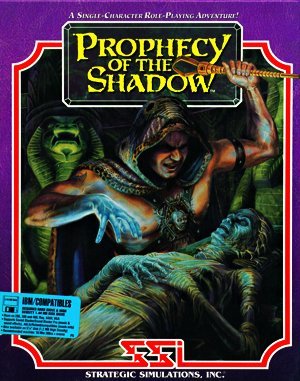 Prophecy of the Shadow game description

A long foretold prophecy is about to be fulfilled. The Shadow Lords are on the verge of entering our world. The hero has to find a way to break the string of events, that are foretold by the prophecy. Magic is dying in the land, and the use of it is illegal — practitioners are hunted by Mage Hunters. And worst of all, the hero’s master was treacherously killed by a poisoned dirk, and the hero is blamed for his death…

The player is controlling a single character in a 2D interface, using an engine specifically designed for this project. The protagonist has three main statistics: strength, magic, and agility (which influences his chances of dodging an enemy attack). In order to cast spells, the hero must learn them from magical tomes found in the game, and equip a catalyst that allows him to use them in combat. The combat takes place in the same area as the exploration, and is real-time: the player must select commands while the enemies are acting. The story is told using still pictures, text, and small animated sequences that used digitized actors superimposed over 3D rendered scenes.

Play Prophecy of the Shadow online

You can play Prophecy of the Shadow online here, in web browser for free!