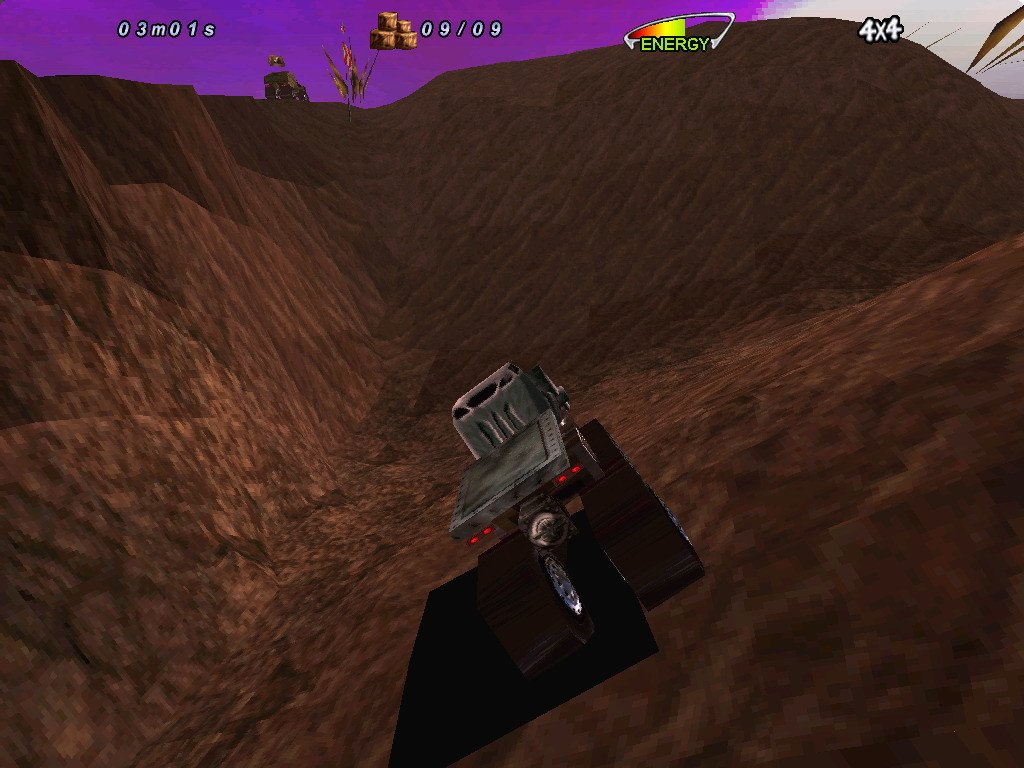 Trucks was launched by Microfolie's in the year 1997 which was loved by all old and young. It’s an interesting DOS game and can be played online by clicking here.

Trucks is an arcade space simulator trucker. So I would call this a complete mess. You control a nameless driver who is under your strict guidance - landing on a planet with difficult to pronounce name to Kurukuru immediately goes to town to make some money.

The plot of the game is quite simple. He sets out in the game in the form of briefings with pictures to the main missions, during which we will fight with the bandits, as they, in turn, strongly prevent to live a good (or not) of the inhabitants of the planets. My only comment is that the plot is not particularly important and is more entertainment to make you smile reading some of the briefings. In-game texts also present a kind of "slang" by analogy with the domestic game Vangers. This simple word game further immerses you into the game world Trucks and will please connoisseurs of a foreign language.

The game world is similar to the system of planets and portals between them; the planets have cities, stations, databases and even entertainment centers, between which is actively trading, and doing well enough, of course, truckers (one of which you are). However, this profession is not just brings fabulous profits, because in addition to the colonies on the planet, there are bandit camps, so - and the crime in full. Infested with bandits, as they should be, that is robbing the poor and unhappy truck drivers. Your task is the transportation of cheap booze, gasoline and other joys, as well as competition (sometimes for survival) with other truckers of speed of delivery of critical cargo: who was the first to deliver, and money. After playing 15 minutes, you realize that this is just the beginning of fun: we are waiting for lots of interesting, crazy, and just hilarious. But about all under the order.

The gameplay is the transportation of cargo from point a to point B - it would seem that can be easier. Now imagine: you go out of town, and there is already waiting for the three guys out; you get a powerful kick in the side, and your goods steals another trucker! You start to chase him, but suddenly it turns out that you're in a desert, passing through the territory of the thrown military base, where you all generously poured fire gun turrets and under cover until you select the load from each other, hurtling towards you gang of Amigos, treat you all with shots from their revolvers and stimulated by greed and the timer inexorably ticking...

Maybe at least silly, but it looks damn cool. No less noteworthy mission. They need to do to obtain a badge to another planet. As you task: to arrive at techno-circus and crush all the giant metal fleas? Believe me, the jobs here, the most insane - from hunting for the little bipedal rhinos head to the races with the car hitched to the rocket engines, allowing to develop a supersonic speed. Not to mention the evil gerbils, the fur of which we will have to produce a very interesting way.

The design of cities and planets made in a unique style using elements of the modern world. Sometimes it seems that the action takes place in unreal, but still existing world. The design of the trucks is also quite specific. The cab of the truck more like a fantastic locomotive - like a tram on wheels derailed. The design of the enemies is as diverse as it is full of crazy ideas. Mexican bandits in sombreros on the muscle, the goblins on a wooden wheelbarrows, strange steam machines, homemade buggies and motorcycles, and, of course, other trucks Laden with weapons from head to toe. By the way, about the weapon: it can be how to pick up a bonus on the road, and to buy for the money. Here we have revolvers, rifles, Thompson submachine gun, the Bazooka, the fists, the head of a bull, juggle enemies - quite a standard choice of weapons. Interesting to see how the machine uses installed on her arms. The machine has imaginary hands and the same imaginary holster. In simple mode drive weapons hanging "at the sides" (one gun left, the other right); when the horizon will appear the enemy, the machine drew his revolvers as the real Sheriff of a Western, and begin to fire at the enemy, and then scroll through the imaginary gun in his hand and hide it back in the holster with the characteristic of a Western sound. Pretty funny looks.

We should also mention the movement of our car: it can drive in a normal mode and a Hard mode Truck - clicking the wheel button of the car swell, giving him great maneuverability and a lot of horsepower; we any rise on the shoulder, but the speed, unfortunately, falls sharply. You also have the nitro boost, which at the time turns you into a Formula 1 car; unfortunately, the fun does not last long, the nitro boost requires recharging in the city or in the discovery of the bonus on the road.

About the graphics is nothing special to say - it is usual to 1997, no special chips or twists there. Open spaces are rendered in a great fog that covers the eyes, allowing you to see at a sufficient distance; except that the low-resolution textures for the time. Model cars is done perfectly. Depending on the cargo that we were carrying, and changed the appearance of the truck. Also pleased with the fact that enemy models, and all other objects, is done qualitatively.

Finally, let's talk about what the game turned out in the end, the French developers of Microfolie's. At first glance, the game seems ridiculous in everything from animation to design. Physics of the movement of the truck confused: sometimes I wanted to smash the keyboard to pieces after another "shifter" on a tiny bump when opponents got past me before the finish. But when you put it all together, pass the mission after mission, this caricatured world with a slight touch of surrealism, as if you start to attract to the monitor behind the ears, when suddenly see on the screen the inscription "the End", realize that the eyes glued to the monitor and it's already one o'clock... and you want a little more.

Tired of your same old routine, want to add some entertainment and fun element in hour life? Play one of the best videogame Trucks online now and change your boring oold routine for good.