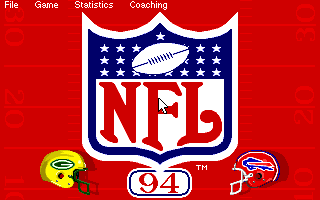 A DOS game was developed by Konami (America), Inc. and then released by Distinctive Software, Inc. in 1993, the game was called NHL Hockey 94. Now you can relive the memories by playing it online here.

The game is made under license, so you can select from all actually existing at the time of release 26 NHL teams and their players (because the license is from the NHLPA). You can play individual matches and the championship. Before the start of the game you can adjust the duration of matches, manual or automatic shift stages and the presence or absence of bullets.

The focus is on action - "coaching" or similar functions are very small. Available manual control of virtually every hockey player and some tactics. For rough play rely punishment, and delete, and disable this option seem impossible. You can control not only with keyboard but with mouse or joystick.

The graphics are drawn, the match is presented in a isometric perspective, and the portrayal for its time, fairly high quality (though shadows of the players there). A great attention is paid to all these details - from the screen with the commentators and the referee to show the player in between periods of the account and the most acute moments of the match, running parallel (if the championship is played). Sound design is also pleasing - there is crowd noise, and even the anthems of the teams. Overall - a good hockey simulator, a slightly improved version of NHL Hockey 95 - was released a year later.

Enjoy playing NHL Hockey 94 online, it can be played on your browser and is free.