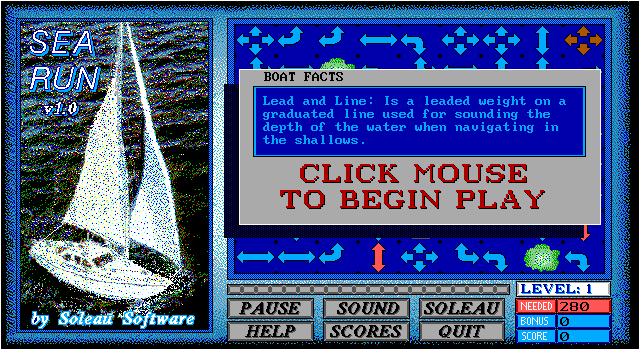 Sea Run, a DOS game was released by the very talented group Soleau Software in 1994. Little did they know that they will end up making history. Play this game again here.

Another game from Soleau Software on the routing. This time the object for which you will have to choose the path that is the sailing boat. As in its predecessor, Ant Run, the rules remain the same. To pass the level you need to get a certain number of points; passed path segments disappear (except intersections) during the transition to the opposite side of the playing field - provided that passed a certain distance; the missing segments are updated. However, there were some innovations. Except of the bonus one of the sectors (here they look like treasure chests), there were red sector, which also bring extra points. During combat, whirlpools, which sinks the ship, and then appears at a random segment of the playing field. And the latest innovation is that the ship before the start can be deployed in any of the four sides.

In General, if you were Ant Run, Spider Run, as well as Taxi Run, and you haven't had enough, then feel free to start a Sea Run.