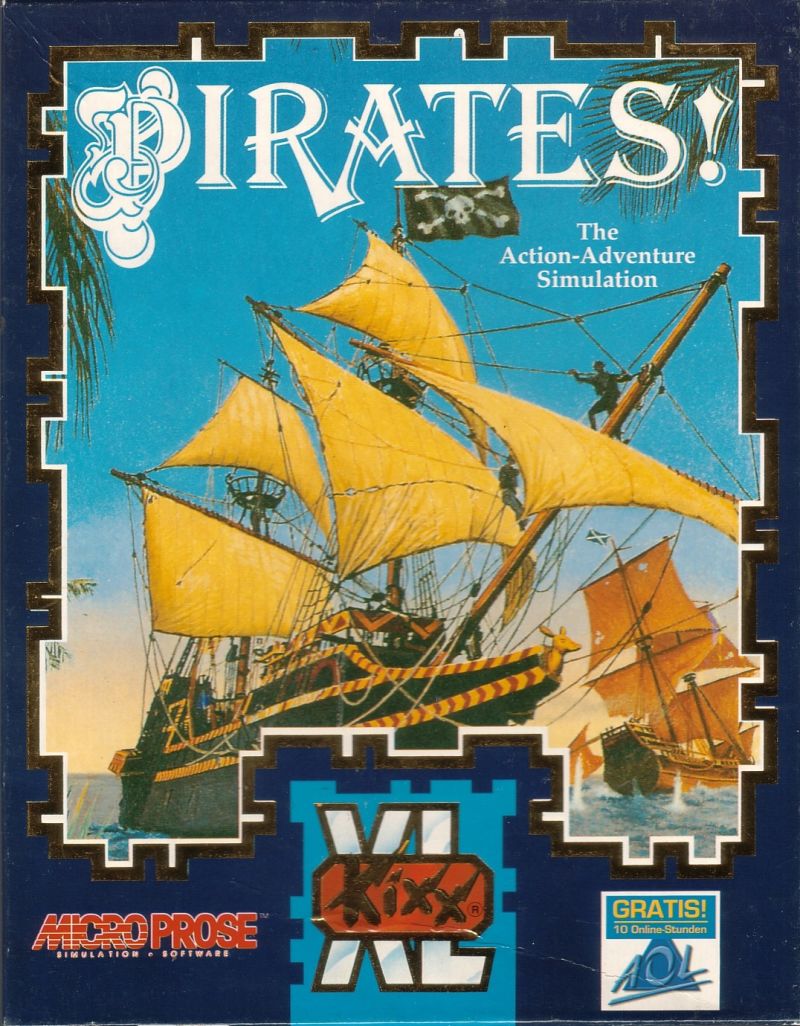 Kixx XL developed a Vehicular Combat Simulator game in the year 1994 called Pirates!. You can play it online now.

On the IBM PC, already included in its full force, a masterpiece of Sid Meier's "Pirates!" appeared in the same year as the original version for the Commodore 64. All the details about the features of this great game you can find on the page of this last one, here we will limit ourselves to describing only the differences of the native for many of today's players re-release.

Alas, most beautiful to call it not be with all RS-patriotism. The fact that this edition supports not only 16-color EGA graphics mode, but the ancient four-color CGA adapter, in which "Pirates!" look much worse than even an ancient Apple II. It is difficult to say what guided Microprose, but the Intro to the game that the screens with subtitles exclusively displayed in CGA palette even when you start to include all the graphic innovations IBM-compatible PC. However, don't be scared: once you correctly answer a couple of questions – choosing the way the graphics mode is not CGA, and EGA, as the game will be great visuals too.

16-color image with resolution of 320х200 significantly added to the detail and color saturation compared to the original publication for the Amstrad CPC, not to mention the Apple II; Michael Haire, with the help of animator Murray Taylor, has updated many of its illustrations, remaining recognizable but became more pleasing to the eye. Can not but rejoice and font of the text, learn now display not only uppercase but also lowercase letters. The only thing that does not allow the publication for the IBM PC to claim to be the undisputed favourite as of 1987 and even more so is the sound design: classical melodies performed by the constant PC Speaker sound is clearly poorer than the original SID. However, if you run "Pirates!" on conditionally compatible with the IBM family of computer from Tandy, three-channel music does return, and the screensaver will sparkle with more cheerful colors.

But it is in PC to gameplay of the legendary classic has added two innovations: first, your team can temporarily split, leaving the crew to wait for you somewhere in a secluded place (of course, if you have an extra ship). Do not forget to provide a strategic reserve of supplies, otherwise former colleagues wander off in different directions in search of forage – well and a happy reunion is accessed from the actions menu, if you come close to previously abandoned comrades and choose "Join Party". In addition to the friendly disposed towards us governors from time to time will be given a variety of assignments – for example, to save captured son, capturing a city of the enemy; of course, in case of success you can count on a generous reward.

Slightly changed the controls: when you start the game offers us a choice of joystick and keyboard; in the latter case the direction of meet eight numeric keys of the small keyboard, and the function of the button is performed immediately "entering" and "5" is in General more or less convenient. In addition, key "V" used for switching sound modes ("Off." "Only background effects" – "All sounds"), but to exit the game you can only restart PC the usual Ctrl-Alt-Del.

In the end, it can be argued that the publication of "Pirates!" on the IBM PC, although not the most advanced graphics and, to put it mildly, unattractive audio component, more than worthy of attention even amid more recent, and slightly more colorful ports of the Apple IIGS, Atari ST or Amiga. Especially because currently it is only one available available for sale in digital form: not so long ago, Tommo Inc. has acquired all rights to its distribution and now, under the brand Retroism, offers it at a reasonable price on such popular trading platforms like GOG and Steam.

Play your favorite childhood game Pirates! online in your browser for free here.