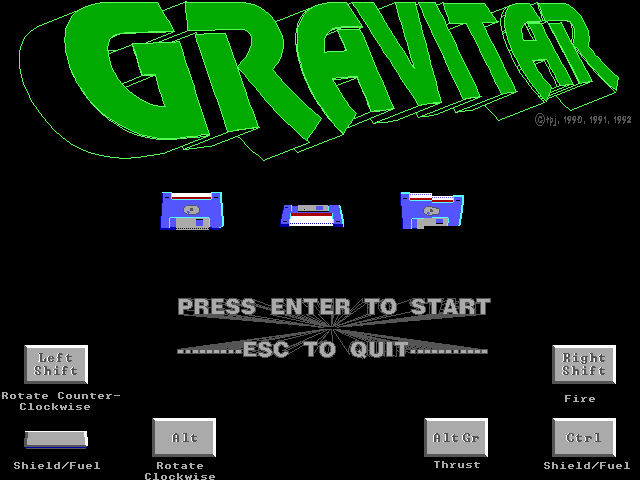 With many different features and various levels, Gravitar released in 1993 hit the right chords right from the beginning. Play this excellent Action game and online now.

Game created based on the old arcade with the Atari 2600. A powerful alien known as Gravitar, in whose honor and named the game, decided to conquer the Universe and began one after another to conquer star systems, are everywhere building their bases, leaving security and inducing fear in the civilian population. Apparently, things have Gravitar go perfectly, so that to oppose it is not solved no one... no one but us – forever a brave pilot a lone spaceship armed with a single laser cannon and a determination to win. Traveling from system to system, you have to destroy enemy bases, patrols and security turrets to contend not only with many "live" opponents, but with the gravity!

Yeah, Gravitar is present the force of gravity, and that is what makes the game challenging, intense and so interesting. Each star system you need to release, presented in the form of black screen space with the sun at the center, around which are arranged three icons, hiding under a planetary base, and another, leading to energy generator aliens. Approaching any of the icons, you will instantly be taken to a suitable level. The planets represent schematically contoured surface on which is located an anti-aircraft installation. Whether they are managed by automatically or someone sits to read absolutely impossible, but they do their job perfectly, without a break, firing into the air and created the atmosphere thick veil of crossfire. You need to carefully approach and post a sentry to pieces, just put it in at least one projectile. Thus destroying all enemy forces, you can safely go to the next planet and repeat the procedure. Assault on planetary bases are useful because they are small turquoise squares, symbolizing the fuel supply. They can be freely pumped into the spaceship on the fly, you just fly up close. In addition to the actual flight fuel required to activate the ship's shields, allowing not to be afraid of the enemy's volleys. Of course, performing feats of arms, you need to follow in order not to crash on the towering peaks and rock walls – perhaps these natural hazards will become even more frequent cause of death than the enemies themselves.

If to suppress the resistance on three planets in a row you have no hands, pay attention to the level of the power generator. In fact, it is a huge spiral corridor with a powerful source of gravity in the center, so that no matter where you were, you will always be attracted to the inner wall. You are given exactly one minute to reach located inside of the generator and a well-aimed shot to blow it up, and then the same way to get out. Of course, in addition to artfully tangled corridor, there are already familiar and turrets. And you happen to die and go into the maze on the second run, the time spent is not restored. The task is close to impossible, but true aces, which is on the shoulder, and then have to waste time on the rest of the planet – they are immediately transported to the next system.

Gravitar is a great proof of the fact that many of the old ideas can be interesting now. And if your soul pushes you in search of battles and victories in space battles, but the heart is asking us again to save the Universe, then do not hesitate anymore and get in your tested the spaceship and go to the depths of space. Today their people need a hero.

Have you ever wondered what kind of video games were played in the good old days? Try playing Gravitar online now and we are sure you will not stop playing again.