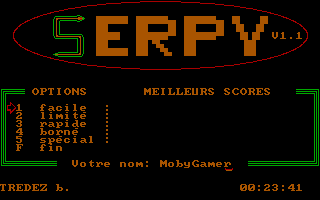 Serpy, a DOS game was released by the very talented group Tredez in 1986. Little did they know that they will end up making history. Play this game again here.

Fans of classic arcade games and collectors game series, you can start to stretch your fingers and train your pronunciation grassiruyuschey "p": I present to you a game called Serpy (from the French developers, of course).

Snake the player meets the main screen with a menu in French. To you is not scared, will tell you more about him, along with the "liquid" basic principles of the game.

The first five items allow the player to choose the mode: the first (facile) – the easiest level with the lowest speed. You can just relax and help the snake to increase the growth, catching, chewing joy. The second mode (limité) time limit (the amount is expressed in a nearly invisible red bar under the main playing field), but this restriction is not hard and the feeling of hustle and bustle you will not. The third mode (rapide) is different from the first high speed, but no more. These noticeable changes can be seen in the borné: level appear more walls, a clash that leads to the death of snakes, so Dodge will have much.

The fifth mode (special) not at all typical classic Snake and is a game "Vice versa": the snake is not lengthened, not swallows constantly emerging "growth stimulants", and, conversely, have to avoid them to survive. It seems the process is quite simple, but that thought was able to relax – be careful! The sixth paragraph under the name fin, I think, will not cause difficulties.

In the game you may notice some nice touches. For example, all your results to date will be listed in the table of records. In the course of the game in the bottom of the screen displays the current time (even if you are very fascinated by the game, one look at the clock will bring you back to reality). About the design Serpy, you can say quite a bit: the graphics are minimal and absolutely not irritating to the eyes, and the sound effects are quite appropriate.

In General, before us the same old snake, albeit slightly modified (not spoiled!), but still a favorite.

Not sure how to pass your time, why not play our classic videogame Serpy online? And the best part, it is for free!