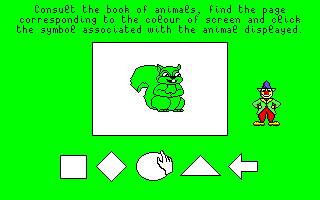 Click here to play Once Upon A Time: Abracadabra online
5 /5

Once Upon A Time: Abracadabra was launched by Coktel Vision in the year 1991 which was loved by all old and young. It’s an interesting DOS game and can be played online by clicking here.

Once Upon A Time: Abracadabra description

One of the games of the trilogy of children's games Once Upon A Time, where, in addition, include Little Red Riding Hood, the most famous and which is not a rarity, and Baba Yaga, the DOS version of which discovered not long ago. The DOS version of this is long been no more than a legend, but as it turned out, there too. The game is another incredible rarity, gifted to us by a good foreign collector.

Unlike the other two stories in this, the emphasis shifted from adventure to action and arcade, although the educational element is stored (or tries to remain). The story can fit in one sentence: the evil wizard kidnapped the parents of the brave young men, who, naturally, goes on a journey to his lair to deliver them, and on the way he will have to survive many dangers and adventures.

The game is divided into 7 chapters (essentially levels), each implemented in a particular gaming genre there is a game from a first-person point'n'click system, where you must solve simple puzzles; a sort of platformer with a "nearly side" in which the hero must run, jump, Crouch and fight with different funny enemies; and, finally, the very weak semblance of a fighting game in first (!) persons with control by mouse, where by it fast clicks should try to win big but also not a terrible boss.

The game has three difficulty levels (though, to be honest, the "real" difficulty is not even on the highest of them), and after first pass it may have started with one of the four moments (why is unclear). The game natively supports not only English but also German, French, Spanish and Italian.

The graphics in all game modes is good enough and I must say, almost not inferior graphics from other platforms, that is, everything is always drawn clearly and accurately. But, good or bad, this game, like other parts of the series Once Upon A Time, too obviously focused on children's audience, so most adults likely would not be very interesting to play it for a number of reasons. On the other hand, should recognize that other parts of it it can't be worse, at least in the platforming mode bit difficult to meet can still, Oh and referred to the rarity of the game – and really higher, that is, at least in the collector's plan is an instance of the most valuable.

Want to play Once Upon A Time: Abracadabra online now, play it on your browser here.

Click here to play Once Upon A Time: Abracadabra online
Rating breakdown

Mickey’s ABC’s: A Day at the Fair