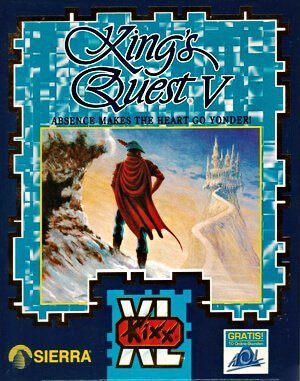 Click here to play King’s Quest V: Absence Makes the Heart Go Yonder! online
4.0 /5
In the introduction to the game, a view of Castle Daventry is shown, when suddenly, a mysterious cloaked figure appears. He enchants the castle, causing a whirlwind to appear, which soon engulfs the castle and lifts it out of sight. Because he is out walking when this happens, King Graham is the only member of the royal family to be left behind. He returns to the castle to find that it has disappeared, and is soon confronted by a talking owl named Cedric.

On a beautiful sunny day, King Graham of Daventry decides to take a stroll in the woods surrounding his castle. When he returns, he discovers with horror that his home, Daventry Castle, has completely disappeared! Graham is at a loss, and wonders how this could have happened, when a talking owl named Cedric appears. He tells him that he saw the whole thing, and that an evil wizard named Mordack whisked the entire castle away, along with Graham’s family in it. Cedric offers to take him to his homeland, Serenia, where his master, the wizard Crispin resides. Surely Crispin will be able to help King Graham rescue his family from Mordack’s clutches.

King’s Quest V: Absence Makes the Heart Go Yonder is an adventure game, and the first from Sierra to use a point-and-click mouse interface. Rather than typing commands on a keyboard to interact with the game world and use the arrow keys to walk around, King’s Quest V instead simplifies all actions down to base commands. To access the different cursors, the player can move the mouse to the top of the screen, revealing a hidden menu with each of the different actions, as well as game options and the inventory bag. By clicking the “Walk” cursor on the screen, Graham will walk as close as he can to the appropriate area. Clicking the “Eye” cursor on items will provide a description, the same as typing “Look at”. The “Hand” cursor is a multipurpose cursor that can be used to push, pull, interact with and pick up objects. The “Head” cursor is used to talk to people (and in the strange world of King’s Quest, often objects and animals, too). Players can also right-click to cycle through the different available cursors. Inventory that Graham picks up now gets placed into a bag. By clicking on the bag, this opens up a sub-window that displays all the inventory that Graham currently has. In here, players can look at or interact with objects, combine them with other objects, or pick them up to use them in the game environment as another cursor.

As with most Sierra games, it is quite possible to die. Bumping into witches, poisonous scorpions, falling off edges of cliffs, dying of thirst in the desert, and many other objects, locations and characters will send Graham to an untimely demise. The player must be cautious as they explore Serenia – frequent game saving across multiple files is usually the best course of action to make sure that you don’t get stuck or have to start right from the game’s very beginning.

Isle of the Dead

Gateway to the Savage Frontier