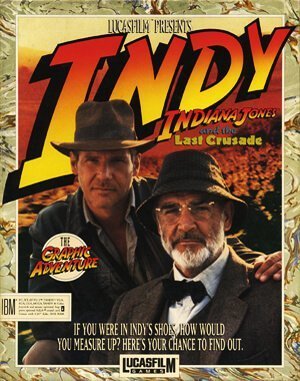 Click here to play Indiana Jones and The Last Crusade online
4.4 /5
Europe, 1938. The Lost Ark was just a warm-up! Now Adolph Hitler is after the most powerful talisman of all-the Holy Grail. A few brave men stand in his way. Fortunately, one of them is Indiana Jones. And this time, he has his dad with him.

Indiana Jones and the Last Crusade: The Graphic Adventure is a popular graphic adventure game (similar to Maniac Mansion or The Secret of Monkey Island) released by LucasArts for DOS, Amiga, Atari ST and Macintosh systems in 1989. The player controls Dr. Jones as he interacts with various characters and visits areas from the film in order to find the secret of the Holy Grail. The game was re-released twice – first with 256 colour graphics and a full digital soundtrack, and later with 256 colour graphics, minor bugfixes and the original version’s MIDI soundtrack. Of all the software adaptions of the film, this one is the most popular with both gamers and critics alike. Play Indiana Jones and The Last Crusade online!

It is 1938 and adventurer Indiana Jones is joined by his father on this quest, preventing Adolf Hitler from capturing the Holy Grail. He will have to deal with Nazi guards, the Luftwaffe and enemy spies as he tries to stop the tyrannical Nazi leader.

The Graphic Adventure uses the same SCUMM gameplay system as the previous Maniac Mansion. Most of the screen is used for a visual rendition of the current scene. At the bottom of the screen are words, which can be clicked on using the mouse to activate their functions. For example, objects can be picked up, used, pushed or pulled, and turned on and off. Most locations are from the movie, but some further scenes are added.

In keeping with Indiana’s action-man persona, the game also features pure action scenes. Unlike most Lucasfilm adventures, you can die.

Two PC versions of the game were released, one with 16 color EGA graphics, and one with 256 color VGA graphics.

You can play Indiana Jones and The Last Crusade online here, in web browser, for free!

Conquests of Camelot: The Search for the Grail