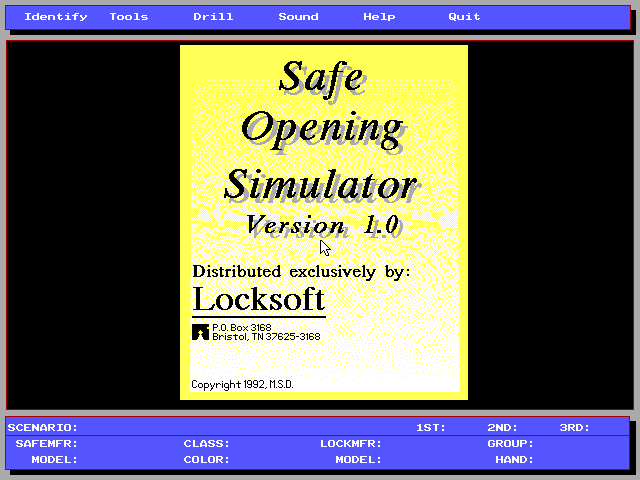 Locksoft, Inc. released a DOS game named Safe Opening Simulator in the year 1993. If you are interested in playing this Puzzle elements online, then click here.

One of the least known and most unique games that has ever been created, which is a simulation of "opening" of the boxes. This is not the only game on a similar subject – there is in fact a puzzle Revelation!, quest Safecracker and so on, but this game can be considered fully the simulator in this case. Plot justification in the game, so it can be regarded as an interactive simulator for the novice employee's Bank vault, and a thief-"the safecracker" (to be honest, the action is more like it was the second). Also in the game there are no levels (though there is a sequence of safe Deposit boxes), some points and even the ultimate goal. It's really more like computer training.

Before opening the safe must first be identified, that is, to determine its manufacturer, model and class of the vault and its castle (please note – the game features REAL-life vaults!!!). The identification is given three tries; if you fail to do it themselves, then the program will do it for you. After this starts the game itself – that is, opening the safe.

Safes come in different types, and each of them provides different degrees of utility information using a story type, and features of its opening. The simplest type is, of course, safes with combination locks, where you just need to guess the correct combination by listening to different sounding clicks after scrolling the wheel one way or the other, which should help you to understand the right combination.

There are other kinds of safes, as well as the many ways their discoveries (including the use of various levers and even the pins!). In addition, possible emergency situations: for example, during a scrolling combination lock suddenly breaks, you need a combination of already dial is useless, and then you will have to drill the safe. And not just drilling, and to monitor the position and angle of the drill bits and generally do the work very carefully so as not to damage the wheels protective system.

If you have nothing happened – the program will allow you to blow up (!) safety Deposit box, but before that, always explain what you did wrong and how it was necessary to open this safe. In the case of successful opening (though better to say – break) you will see the following box.

The graphics in the game is extremely minimized – only the safe (pictured, by the way, utterly high quality, almost photo-realistic) on a completely white or black background and also many text panels with various tips. In other words – just "the national anthem" the seriousness and rigor in the design and approach. Without a doubt, this game gets a more than deserved top score, but to recommend it except to fans at the same time something very difficult and really exotic.

Not sure how to pass your time, why not play our classic videogame Safe Opening Simulator online? And the best part, it is for free!

King’s Table: The Legend of Ragnarok