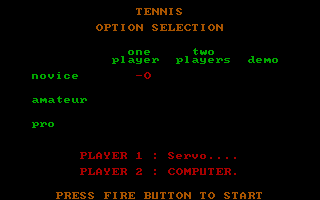 In the year 1985, Imagic developed a Bird's-eye view perspective game by the name Tennis. You can now play it online here.

One of the first tennis simulators on the PC. You can consistently match play-quarter finals, semi finals or just the finals – of course, such names is conditional. The number of sets from three to five.

It is in this game first appeared, many of the things that later became quite common for the tennis of computer simulation: different types of strokes (including forehand and the back hand), selectable power, speed, and impact direction. Although there were such things in later games are extremely rare; there are even figurines of boys who bring off outside of court balls.

The graphics in the game for years release is truly unmatched. Here you will find not only an almost 3D (in 1985!) and amazing definition drawing players of different parts of the environment (perspective review – isometric), but the shadow cast by a flying ball, and animated tribune, which turn the head to follow its flight... One word – this is really one of the best simulations of tennis at all times and one of the progenitors of direction in principle. At this point, the game is a huge rarity, so it probably will be a great decoration for any once it started working.

Tired of your same old routine, want to add some entertainment and fun element in hour life? Play one of the best videogame Tennis online now and change your boring oold routine for good.