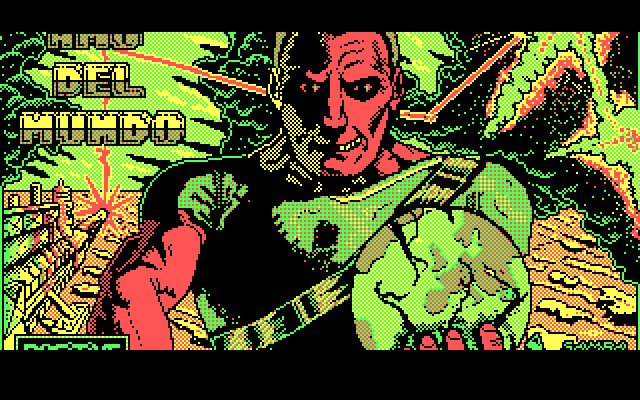 Positive developed a DOS game in the year 1990 called El Amo del Mundo. In the video game ranking, this game ruled the charts for a very long time. You can now play it again online by clicking here.

The opportunity to play this game people have appeared recently – before that time it was considered completely lost even in the Homeland, in Spain. The game is an arcade game based on (but it is based on) is wonderful, but, alas, not too well known in the Jules Verne novel "Robur the Conqueror".

Why is the "explanation" - primarily because the game is rescheduled in the near future regarding the year of its release (particularly in 1992). The main villain has the same name as in the novel, and the goal is the same – to conquer the world and subjugate it to his will, for what this evil genius is going to use them designed a monstrous machine, which can turn into any type of equipment, whether aircraft, ship, submarine or even a combat robot. The player assumes the role of a nameless hero, whose mission – to stop the madman.

The gameplay is very complicated and difficult to understand – it's a real Spanish game in one word. Side view, hero, dressed in a suit that runs fast, can not just jump, and even some time to float in the air and it is not helpless – let the enemies of the series some laser charges. The enemies seems to be all the same type and are represented by small robots, and sometimes they can even "run". The character has a certain endurance in the lower left of the screen there is a scale showing how much life energy he has left at the moment.

Our main goal is not to give the Robur to use his car. You need to pass – limited time! eight of the small (but not very large) levels, collecting each of them the plot is important bonuses – "pieces decode". With their help, you can turn off the infernal machine. "Pieces" of these very much, they are different colors, and they need to gather quickly, and we need two types: green and red. Green to win we have to collect fifty, but they occur frequently; red need only five, but finding them is problematic. The connection between levels is carried out by means of teleports. And yet there is an additional weapon in the form of a boomerang...

But do not think that all so simply, it is because the real Spanish game. Pieces of decode a little to collect – they must be immediately and apply, and apply correctly, according to the rules. But these rules – is a real puzzle, which is only fifteen seconds! Looks puzzle like that. On the screen there is a code, consisting of the following sequence: two letters, then two digits, then two letters. How to solve it? Only with a manual transmission! Because it provides a special table solution: you need in the left column to detect a sequence of four letters that are present in the dropped us code, in the top row to find there number and then find the table number, located at their intersection, and quickly enter it into the computer.

Graphically, the game looks very, very nice – but to describe such graphics, words, to put it mildly, uneasy. Most of all, the picture here is similar to the old game for the Amstrad CPC platform – the same speckled color and a rather conventional portrayal, but in this case it is somehow insanely happy.

Verdict – this game is hard. Wildly complex and even incomprehensible at first. But she carries so that to put it down after a while is simply impossible. And if we remember that until quite recently, the world (the world!) was deprived of it, and now you play it, the soul fills with some kind of unimaginable delight, from which all difficulties seem to be overcome. Therefore to pass this Spanish masterpiece to any fan of hardcore you just can't.