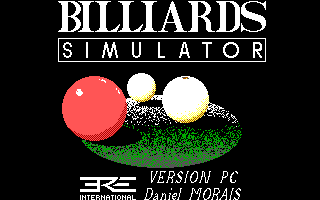 A Sports game, Billiards Simulator was released in 1989 by the famous developed ERE Informatique. It is a DOS game and is perfect for all video game lovers.

This game, as its very explicit title, is a Billiards simulator. More precisely, one of its varieties – cannon, which has only three balls, and on the table there is Luz.

Each stroke is divided into two "phases". In the first, which is presented in псевдо3D, the cue must be placed on one line with the balloon, while the camera can be rotated, changing the angle. Then the game switches to 2D, where you have to choose a specific cue (of the three; to that effect – hard to say), the angle of shot and its power (these indicators will be presented in the form of likes diagrams). After selecting all these indicators is not the strike itself, which, depending on its result, you earn any points. It is worth noting that the game has a number of presets: for example, you can establish a particular weight of the ball, friction and bounce of the ball.

The graphics in the game albeit minimalistic (due to its genre), but the eye is very pleasant. However, in such games it is evaluated and should not – since, while playing, that soon completely forget. By itself, this thing is unlikely, of course, is something amazing, but for connoisseurs of video Billiards, if any, may be of great interest. In addition, the game objective is very rare to find it in the Internet today is almost impossible.