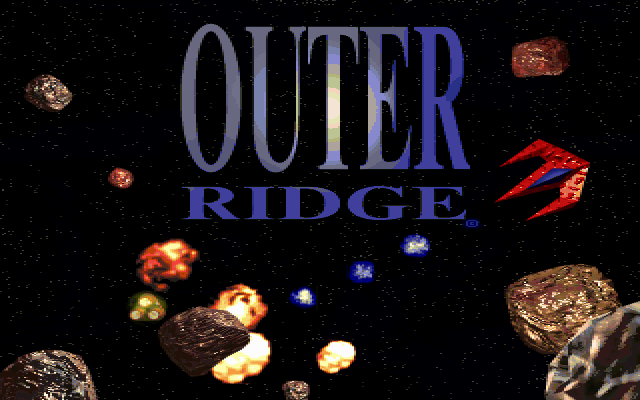 Outer Ridge, a 1st-person perspective game was developed by Wizard Software in the year 1995. The Arcade is so rewarding that you will thank us later. Play it online now.

The plot is: you are hired by some Corporation pilot, who has to clean up from the small asteroids of the territory between Jupiter and Saturn for easy navigation of the ships through the Solar System. Asteroids here, just an incredibly a lot – so much so that to destroy all impossible, so each level has a mission to destroy a specific number of them, to be able to move on (although automatic transfer is not – "the door" on the output level will have to find yourself). Older the level, the more asteroids there are and the narrower the passages between them, so the game becomes more difficult.

After some time (not immediately) appear (yay!) the ships of aliens (different species), with which to fight in parallel with the destruction of the asteroid. Please note – the asteroids to alien ships safe (unlike yours). Of the enemies I would especially like to mention the ships-minelayers asteroids (unusual and very sneaky enemies).

The game is first-person, management is very convenient (the number of directions of flight of a nice surprise), the essence of the gameplay is simple and will be understandable to everyone, and, of course, there are a variety of bonuses derived from destroyed asteroids: to fill or doubling energy shield of the ship (incidentally, he plays the game quite an important role – it can withstand a lot of shots and collisions), additional powerful missiles, instant level completion, and so on.

The bonus always appears after the destruction of the asteroid, and once the latter is destroyed, the fire should immediately stop, because you can destroy the bonus. Weapons not very many shells, bombs, missiles and super-weapons. Interestingly, the number of points on the level is not determined by the number of destroyed asteroids, and number of shots (in my opinion, it's not very good).

Still in a truly sadistic way shown the process of death of the ship: if the damage is critical, you lose control and start spinning across the screen, sometimes quite long, until you crash into an asteroid and will not die completely, and nothing could be done. Only the level is given three lives, but with the loss of every lost, all found on the level of bonuses and weapons.

Graphically, the game looks great: this is just the beginning of the era of "heavy" DOS'a, so we are expecting beautiful black space, a variety of special effects and interesting design of various space objects. Overall – a great toy for entertainment that combines fun and dynamic gameplay and a really great picture. All fans of great music – highly recommended.