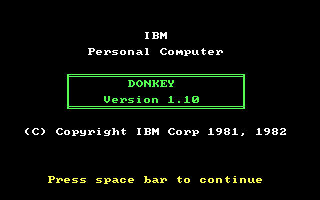 In the year 1981, Donkey was launched by Microsoft, a top-notch Racing / Driving game with an amazing and engaging Arcade gameplay. Click here to play it online.

I think bill gates never invented anything except Windows? Wrong, and this game proves it.

Its meaning is simple as pie: you play for the machine that looks suspiciously like a race car "Formulas-1" (how we have lived - the cars drive on normal roads!), which need time to move from one lane to another, not to crush suddenly appeared on the road a donkey. Um... Or a donkey, out on the road, crushed the car, and with it the poor driver, that is you. Um... or not? In short, choose an option from the two above to taste. Because when the machine with the donkey, each of them splits into two pieces, which in turn fly in all four directions.

Now a couple of words to the violent haters of the programming language Basic. I think you already guessed that the game is written on it, and already want to close the page. As you wish. But this game will still be an example of what a good game (and for 1981 this is a very, very bad), you can create and non-professional programming languages. It should be noted that this game even was distributed with earlier versions of the operating system PC-DOS, so it gained popularity from the then users.

In General, the game should see every self-respecting once it started working. And just to see what did uncle Billy as long as you have not earned my first billion dollar, I think, be interesting to many. As for "killing time" this game is quite suitable.

Play your all-time favorite Donkey free on your browser here.

Street Rod 2: The Next Generation

The Legend of the Seven Paladins 3D