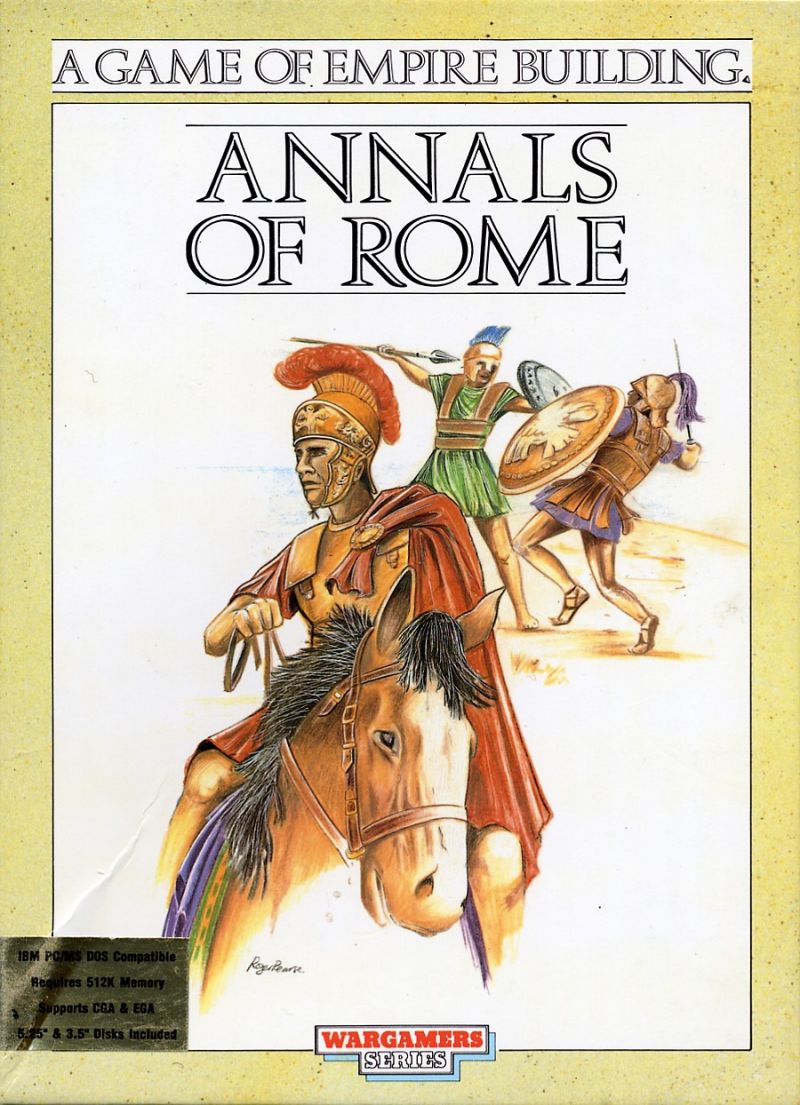 Developed by Personal Software Services in 1988, Annals of Rome is a perfect Strategy/Tactics game which ruled the arcade for several years. You can now play it online here.

A very interesting historical ("pseudo" her language does not turn called) strategy the history of Ancient Rome with a strong role-playing element.

The game takes place in the heyday of the Roman Republic, the same time that the descendants would later be called the "age of piety, simple and strict morals". However, now you will be able to check if it was actually...

So, the year 273 BC. it's been two years since the end of the war with Pyrrhus, and the huge-eared monster is no longer trample on Italian land. The silver used for coinage, a separate Etruscan town are still trying to assert their independence, but unification of Italy under the rule of Rome, however, the process is irreversible, and the ruling men begin to look to the fertile fields of a distant Iberia, once completely oblivious to the fact that they wave the banners of the forces of another, more ancient power coming from the hot African Sands... Before the First Punic war left nine years...

In this game you will play the role of "ordinary" Roman Senator of the Republic. However, "ordinary" only in the beginning of the game only depends on you what you will be able to achieve. The game is divided into three components – strategy, military strategy, economic and diplomatic strategy, which in many ways is approaching an RPG.

Military "part" is at first defensive and then, if you like, you can get lucky, and offensive operations in steps against all kinds of enemies of Rome from the Etruscans and Carthaginians to (in the future) the vandals, the Persians and the Parthians. By the way: the Parthians – it is not the Persians, and those who subsequently became the ruler of Persia, so you have a chance to give them to do. And, for example, to defeat and destroy all the Germanic tribes for many centuries before they will get stronger and will happen you-know-what.

The game refers to historical events of the very "care" - "good" every historical event is happening at the moment and exactly how and when it happened really. But playing without the ability to change the story, of course, uninteresting. Therefore, although the accuracy of and applies to everything, including even the balance of forces in each battle, a chance to win, for example, Hannibal at cannae you have, and any victory or defeat, which was not a true story, create another story. You can by their actions to take over the known world and to surpass Alexander the great, and unable to destroy their homeland and to give at the mercy of the barbarians.

The battle, as already noted, step-by-step. An important feature is the so – called "generals", led the troops. The more battles won, the more "generals" of experience and rewards, the more they're committed to you. In the future, when your power will be larger and stronger, you will get the opportunity to move your generals in different provinces of the state. By the way, the question of why, of all the senators exactly what you are doing defense of the Fatherland, we have to leave unanswered.

The economic component is, unfortunately, secondary to the military: in fact, the whole economy here is to collect taxes from the population and control over the amount of the tax: it is clear that to abolish it altogether is impossible (or rather, you can, but to do this accurately shouldn't), but to increase very much – also not necessary, otherwise the plebeians (and Patricia) will rise. Although if the situation in the country is desperate, it is still possible to do and not fear of revolt – "people will understand". It's still a Republic, "stern fatherly manners"...

But the morals of these already hopelessly flawed, the process of corruption of all population groups, develops rapidly and is irreversible, unfortunately. It is evident from the third part of the game – diplomacy. For example, if one of your "generals" decided to rebel against your government or for some other reason, it can always be bribed. You can even bribe almost everyone, including other senators. And in the Senate (if you forgot, you are – Senator and when not with the army somewhere on the borders of the state, go back to work) takes place is no less terrible and important battle than on the distant fields, let move it is and other weapons. Any of your action or even suggestion, from changes in tax plebeians before war was declared some of the Eastern Kingdom – may cause a variety of opinions of your "peers" and create the most incredible plot against your person.

Perhaps, the schedule is the strongest drawback of this game. Alas, Annals of Rome is a true "SIM cards", not knowing of other graphic cards, except for the CGA. Map of the Mediterranean, painted the few available flowers (and, of course, changing your actions), but black screens with white letters and numbers severe impartial statistics – that's all we'll see here.

This game is very interesting, but it failed to win even popularity, not to mention the present recognition. Yes, the gameplay is entertaining, and imagination draws a white marble halls with columns where the benches sit white-haired, shiny fat men in togas, in his heart deeply hate each other and green plains, the original inhabitants of which, dirty, but honest savages in animal skins, without fear of looking at slender step marching legions of Rome... And the Great graphics of the "SIM card" you could forgive a whole, if... if after some time, after a very similar game Medieval Lords, we have not shown, even "SIM card" you can make a much more ambitious and thoughtful.

Verdict – not the first place in its "discipline", but still – a very good, intelligent, carefully related to the historical facts informative and able to bring a lot of fun "hardcore" strategy game.

Have you ever wondered what kind of video games were played in the good old days? Try playing Annals of Rome online now and we are sure you will not stop playing again.