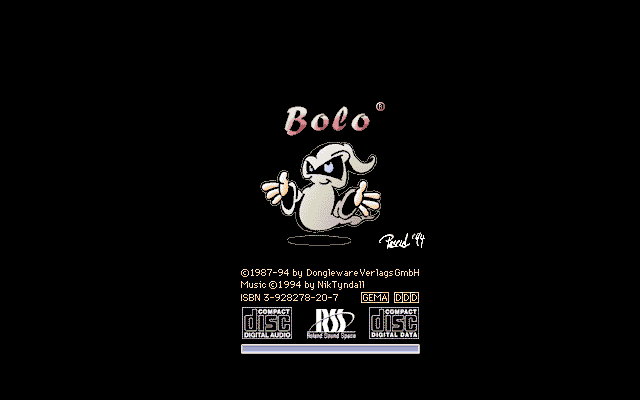 Remember the good old time of playing an awesome video game which made sad and long weekends happy and exciting? Bolo, released by Dongleware Verlags GmbH in 1995 is exactly that game. Replay here.

Arkanoid is a remake of the same game from platform to Atari ST in 1987.

What is arkanoid, you must know all: there's a platform, there is a ball, which is repelled from it, and there are blocks (bricks, blocks...) in the upper part of the screen that must be destroyed hit them pushed off from the platform of the ball. And here all the same. At first glance.

But in fact there are a lot of features. For example, the platform that most games only goes in the bottom of the screen, this is not limited movement and can be moved anywhere. It is that wherever you go – it is completely us controlled, you can move it to any corner of the screen or even in the upper part; the only limitation is difficulty in moving the platform between the passages to the not yet destroyed units.

In addition, there are abundant (each of them has its own background) and, more importantly, a real variety of levels (there are fifty): where we are waiting for the unusual shape of the platform where the ball will slide in the air, and somewhere to push off from the platform with very little force, and it happens that the ball is generally attached to the platform with a rubber band and can fly off from it only to a certain distance!

Naturally, as in most similar games, units are able to give certain bonuses, but in this game they are more often harmful than helpful: the ball can be magnetized, to throw into the far corner, there could be a darkening of the screen, turbulence and even the destruction of the platform. Speaking of twist – in this state platform, if it is between blocks, can easily get stuck. Is on every screen of the trap – the so-called "black holes", located in the lower part: if the ball hits one of them – you lose (of course, several attempts to pass the level will). And if at the first level, these holes are not so many (eight in total), then on the second a cluster.
Levels must take place strictly sequentially, but on reaching a certain number of points will have access to the arbitrary choice of level. The save file of the game can be only one.

Graphically, the game looks great, the backgrounds of the levels are really very vivid and memorable, what's more – apparently, the "spirit" of the original game are preserved here in full! The Bolo is basically a black-and-white just to match the time of the release of the original game. As mentioned, each level has its own background – a kind of funny picture (ladybug, working at the computer is a funny man and so on), and in case of successful completion of the level, this figure suddenly sparkle with bright and soft colors! But the picture in that game is not worth to evaluate, because the main thing here is not it, despite the fact that it is truly wonderful.

Verdict – it's probably not the best arkanoid possible, but clearly one of the best, really beautiful, original and evocative just the rush of warm nostalgic feelings that is sure to please any fan of the genre.

Play your favorite childhood game Bolo online in your browser for free here.